Women at the wheel 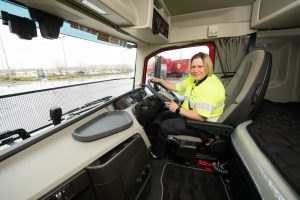 Katie and her fellow drivers-in-training completed the Superior Heavy Licensing Program for Women – an intensive four-week course that aims to attract more women into the driver’s seat and to improve truck safety. The program is an initiative between Wodonga TAFE’s Driver Education Centre of Australia (DECA), Transport Women Australia (TWAL), LinFox, Australia Post and Volvo, who supplied a prime mover for the students to gain experience behind the wheel.

It was a chance conversation with a friend that first got Katie thinking about truck driving. ‘A mate who is a garbo said having a heavy truck licence is great because you do deliveries or drive a forklift, you can do heaps of different things with it and go to a whole bunch of different places.’

After six years as a postie with Australia Post, the job was starting to pall. ‘I wanted a change. I wasn’t getting any job satisfaction and I was really unhappy about it.

‘I’m the sort of person who’s always looking to better myself. After I finished high school, I trained and worked as a chef. After a while of working I decided to do the Certificate IV in Training and Assessment because I thought that I’d like to get involved in training.’

‘There’s a serious driver shortage so it’s all hands on deck with a whole lot of people in the industry collaborating to find ways to get more women onboard.’ Simon Macaulay, DECA, Wodonga TAFE

After applying for the course and being interviewed, Katie was thrilled to be offered a place.

‘I was rapt, really excited.’ Like the rest of her classmates, Katie had never driven a truck before she enrolled in the course.

But excitement turned to dismay once it was her turn to go for her first drive.

‘It was really daunting at the start. You’re in a massive truck and it’s overwhelming. The first time I got behind the wheel I was like “Let me out, this is just too much.” The fact that it was manual didn’t help either.

‘But then I just said to myself, “I have a mortgage to pay and I have just got to do this”.’ The intensive course covered theory, practical training, mechanical appreciation and assessment and was run at Linfox in Melbourne’s Laverton.

‘The trainers were great, really amazing. They were there to answer all our questions and give us encouragement. They acknowledged our feelings about driving such a big vehicle. One trainer shared how his brother had died out driving a truck. They were like big daddies to us.’ 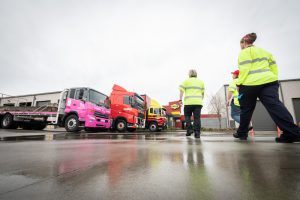 Representatives from Transport Women Australia offered mentoring in topics as diverse as dealing with sexism in a male dominated industry, to tips for mapping female friendly facilities on transport routes.

‘The training was very practical and we got great experience behind the wheel. We’d go out in a truck as a passenger with a more experienced driver, it could be male or female so you could watch and learn from what they were doing as well as having a chance to practise yourself. It was great having the chance to do that.’

‘I really recommend it, it’s a really good experience to challenge yourself and get out of your comfort zone and do something different with your life.’ Katie Annetta

Then came the test – a 90 minute drive in and around Shepparton. ‘It was challenging because you have to watch out for the way you take corners, make sure you’ve got enough room at roundabouts, and enough leeway not to hit the gutter.’

Back at Australia Post, Katie has found her transition to her new role has been smooth and as a female truck driver she got a warm welcome. ‘I just can’t fault them, everyone’s been really positive and encouraging.

‘The first time you get behind the wheel after you get your licence is daunting. You hear of a lot of accidents. So you have to be aware without letting it undermine your confidence.

‘I’ve been driving on my own for 5–6 weeks and it’s good now. I drive from Sunshine along a route that takes me to Somerton, Derrimut, Tullamarine and beyond, loading and unloading and doing deliveries on busy roads and in heavy traffic in an 8 ton truck. It doesn’t quite feel like second nature yet but I’m getting there. It was just the change I needed and I’m really enjoying it.

‘I’ve got big plans. My partner and I are building another house so we might even need a second mortgage. Not that I’m earning more than before, I’m earning less. But I’m much happier. It’s not all about the money. 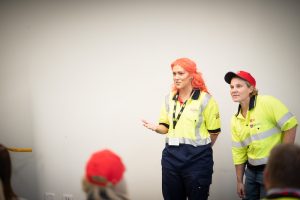 ‘My future plans are to become a trainer and assessor at Australia Post. I feel my career prospects are good as a driver and I’ve put my hand up to assist with the next training course that’s offered.’

Currently 98% of Australian truck drivers are men with the average age of 47. This ageing workforce, combined with growing demand is contributing to the shortage of eligible drivers and putting pressure on companies like Linfox, Australia Post and Volvo to look at ways to attract more women into the heavy transport sector.

James Dixon, General Manager Transport & Aviation at Australia Post says, ‘It’s important to make sure that we remove the roadblocks that prevent talented people from joining the industry. We value diversity and appreciate the benefits an inclusive workplace brings to our customers, our business, and most importantly, our people.’

Simon Macaulay, National Manager Transport at Wodonga TAFE’s DECA says, ‘All eight women graduated with their licences and word has gotten round about the success of the program. We’ve had a huge response from industry with 5 or 6 companies wanting the courses to run in February next year.’