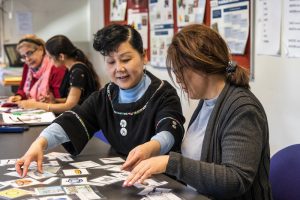 When new graduate Shveta Bhutani began teaching her first English as an Additional Language (EAL) class she was keen to forge closer links between her diverse group of adult students at Preston Reservoir Adult and Community Education (PRACE) in Melbourne’s north.

The 17 students in her accredited Certificate II EAL class ranged in age from 28 to 65 and came from places as diverse as Somalia, Iran, Iraq, China, Greece, Ethiopia, Hungary, Libya, and Lebanon. Some were doing the Certificate to get a job, others because they wanted to go on to further study. Some whose children had grown were realising a long-held dream to learn English now that they had time on their hands, and some older people were there because they wanted to feel part of their community.

‘It was a great mix,’ Shveta says. ‘They’re all different.’

After working as a relief teacher, new graduate Shveta was excited about learning how to run her own class. ‘I realised I wanted to do more for my students.’

‘During my course I did research and read papers that showed that people learn better if they know each other. So I started thinking about ways of helping this along.’

She decided on using a closed Facebook group. The students were enthusiastic. ‘They said, “Let’s do it!”, “That’s great!”

‘EAL classes are big on group work and working in pairs and students learn more from each other than they do from the teacher. A language class works best if all students are comfortable with each other.’ Shveta Bhutani

‘I wanted to use it as a platform outside class for students to have fun and a place to use English — even if they were only reading posts or writing one line — because in between classes so many of them are using their mother tongue at home.’

A few of the students needed help so she nominated more confident users as Facebook ambassadors to teach the others.

Shveta decided to keep it simple. ‘When I started, it was more of a place for us to interact and I would post a picture of something funny that happened in class. And we would all laugh about it. I also used it to share class exercises, organise class parties, and share information on English grammar or vocabulary.’

But her posts to the group were relatively last minute and ad hoc. ‘I was teaching Monday to Wednesday so I only had two days a week to be active on the Facebook group. By the time Thursday came around I would still be thinking, “What am I going to post today?”. 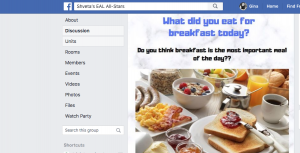 An opportunity for professional development

No one else at PRACE was using Facebook with their classes so when PRACE’s Education Manager Libby Barker heard about the idea she recognised its potential as a learning opportunity for teachers and threw her support behind it.

‘I’ve felt for a long time that professional development works best if teachers have the opportunity to trial new practices and reflect on what worked, what didn’t and why,’ Libby says. ‘Pairing a teacher with a second person, ideally a mentor or ‘expert’, to discuss issues and reflect with, really facilitates this. Setting it up as a project or trial takes the pressure off too so teachers can focus on what they’re learning instead of on outcomes.’

Shveta worked with Anna Morgan, Community Engagement and Innovations Coordinator, to give the project a clear direction; establish how much time to spend on it; develop a better understanding of her expectations of her group and decide on what to post. The aim was for Shveta to become a mentor and share what she had learned with other teachers who wanted to trial Facebook groups with their students.

She began experimenting. ‘One day I would post on grammar and ask a question. The next week, I’d ask students to share a picture from their hometown with “Tell us something about the city you were born in”. Or “Share your favourite restaurant in Melbourne that serves food from your country”. And I would share a picture of my favourite Indian restaurant.’

‘Anna suggested linking posts to units and encouraging students to complete a task. So I created a challenge. ‘Can you find two phone numbers on the Centrelink website? That didn’t get a single like or comment. Then I set up a quiz on irregular verbs. Same thing. Nobody was interested. It changed the way we thought about it. We found out what they wanted to do on Facebook and decided that we should stick to that.’ 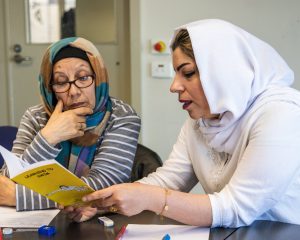 Posts that worked best were like, “What are you cooking today? I want to see a picture of it tonight on Facebook”. One student posted a picture of the meal she’d cooked and wrote “Come on guys share your pictures!” and that got 27 comments.’

‘What we realised was that they were not interested in grammar and vocabulary and serious stuff. They were more interested in conversational posts they could connect to. For example, “What did you eat for breakfast?; How do you spend Friday night?; Show us with an emoji”.’

Encouraging group members to interact has been key. ‘For the Facebook group to work students need to feel that their teacher will like, tag, and mention them in posts so I had to be quite involved to help them build this confidence.

‘In class I say “Imagine that you ask me a question in class and I don’t reply. What would you think?” And they say, “We would think that was very rude.” And I say, “Imagine I ask a question in our Facebook group and no one replies. I can see that you have seen my post and still you don’t interact.” And they say “That’s bad manners”. So they can see how each other might feel about being ignored and it makes them more aware of responding to each others’ posts.’

Shveta is more organised too. ‘Anna and I sat down and decided if I created the posts beforehand, one or two a week, I could have 20-25 posts at the beginning of the 9-week term.’

‘Something that is fun that intrigues them that is light-hearted with lots of banter is still learning.’ Shveta Bhutani 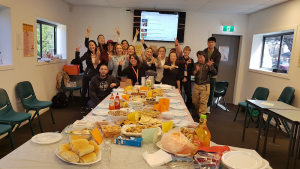 Shveta has noticed the students developing relationships independent of the classroom. ‘They think of this group as their place and their zone. Over time the students have been initiating more discussions, and sharing in the Facebook group without me and I want to build that.’

Her classroom is already a warm and encouraging place, Shveta says. But she’s noticed a change in the group, apart from an improvement in their English. ‘They are more affectionate towards each other and a more close-knit group. We have started to understand each other’s culture better. And we are better friends.’

Plans for Shveta to work as a mentor for other teachers have been delayed by the coronavirus. But her class was better prepared than most when it came to the lockdown because they were more confident about using new technology and adapted well to online classes, Libby Barker says.