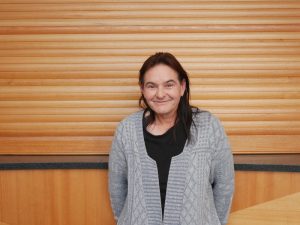 When Chris Roland attended her first class at TAFE SA in 2019 after almost 30 years away from a classroom it was part of a promise she made to herself. It was also part of her journey of recovery. Chris is one of the three Adult Learners Week 2020 scholarship winners.

As a survivor of domestic violence Chris had been traumatised by her experiences. She hated leaving the house and when she did she was hyper-vigilant.

If she had to go out for an appointment she would park as close as possible to the entrance of the building so that she could get inside as quickly as she could, terrified that someone would recognise her, that her perpetrator might find out where she lived.

But there was no option of taking her car into the city when she started at TAFE SA a year ago. So the idea of travelling by bus to her first class at TAFE SA in Adelaide’s busy CBD seemed overwhelming.

To cope, Chris set herself small goals. ‘My mission was just to get there on day one. And the first step was to get to bus stop and stay there until a bus arrived. But once I got there a car went past and it backfired and I got such a fright I just wanted to turn around and run back home. Meanwhile the bus went straight past me so I had to tell myself to stay and wait for the next one.

‘I was as disguised as I could possibly be. I wore a hoodie and sunglasses, and I was dressed totally in black so I wouldn’t draw any attention. After I caught the bus and got off in the city I started walking but I kept having to stop and go into shop doorways because there were thousands of footsteps behind me and I didn’t know whose they were. My stress levels went through the roof.

‘It took a few months for my paranoia to wear off. First I took the hoodie off, then the sunglasses. Gradually over 6 to 9 months I began to relax.’

Initially Chris didn’t have much confidence in herself as a learner. She had acquired brain damage. ‘Sometimes my brain doesn’t function properly and I can’t say what I want to say. I have this disconnect between what’s in my thoughts and what comes out of my mouth.’

‘I didn’t have faith that I could stick it out. So I thought I would set myself a goal and aim to do one semester.’

But it wasn’t just the academic demands that Chris was worried about. As a single mother of three boys with disabilities her life is full, especially with COVID lockdown and no internet. Finding time for studying was always going to be a challenge.

‘But I’ve been determined not to let things get in the way of my course. I have had to learn to fit my studies in around my children. My lecturers are used to me sending in my homework at 3am. I give myself a pat on the back for getting it in on time and finding a way to get it done. Every second I have spare I focus on my studies. I always have my course folder in the car with me so on school pick ups if I’ve got time I will squeeze in a few minutes here or there. It has been a huge juggle to fit it in but I’ve managed it.

‘Once I got to TAFE, it was a very different atmosphere. It was a course for women taught by women and I felt safe.

‘All my lecturers are fantastic. All my classmates are like sisters. If one of us is sick or are kids are sick we’ll record the classes for each other so we don’t miss out. Everyone helps each other. I’ve found friends for life there.’ 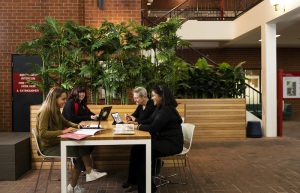 After leaving the 12 year violent relationship, Chris and her children spent 17 months in the Domestic Violence system where Chris participated in the education programs on offer to women in shelters.

‘In the domestic violence services they do a lot of education around domestic violence. You learn about how it’s not personal to you, how it’s a part of a pattern in our society. It helps you to think about what you want to do with your life, to move on, to heal. The education officer said to me towards the end of the program, “If you loved what you learned with me, why not take it to the next level?” She suggested the Womens Studies course at TAFE and when I looked into it I thought that was right up my alley.’

‘The day I formally left the domestic violence system I thought “I’m going to do something for me, something to help me recover. I am not going to sit at home and be a victim. Yes these terrible things happened but I can have a better life.” I refused to give my former partner the power to destroy my future. I’ve lived with violence for 48 years, I grew up with violence. I’d had enough of doing what I was told.’

‘I had a violent home life as a kid. My father was very abusive and I left home at the age of 12. I thought I was better off living on the street. I was very depressed because I wanted a better life. I was lucky enough to have a student in my class whose mother had a rental unit and I approached her and told her my story and asked her if she would rent the unit to me. She did, with strict criteria, and for 3-4 years I was able to get some stability in my life and get my mental health back on track. But I hardly ever attended school. Every now and then I’d show up and hand in school work but I had to work 3 part time jobs to pay the rent, pay bills and buy food. I was independent and looking after myself from a very young age. I managed to do a little bit of school work here and there. But education was a luxury to me.’

‘I never felt like a kid. I never felt like I had a childhood. I would see all those kids my age going out drinking and going to parties but I couldn’t spend money on those sorts of things because I had bills and rent to pay. Because I left home at such a young age I saved up as much as I could and the big thing for me was to own my home and have some stability. Having a home was my number one priority.’

Chris says the course has changed her.

‘From day one of who you were to who you are now, you are completely different. My favourite subject is Advocacy for Women where you learn how to empower other women to advocate for themselves.’

I loved it from the moment I started. I’m a totally different person now.

‘I’d love to volunteer in the future because I have gone full circle. I’ve still got a long way to go but a year ago but I didn’t think I’d be this confident now. I had a fear of men and even going to the cafeteria at TAFE with men and women was a challenge at first but that was a good thing to have to face. It’s a safe learning environment that helps you blend in again.’

‘At the start there were so many triggers for me. Learning about violence in class can trigger memories that can come flooding back. At the start I would cry over slightest little thing that mentioned something I had experienced. But doing the course has been a very healthy exercise in exposure therapy. Today I’m much more detached from those emotions and I feel much more empowered. I don’t have those emotional triggers anymore.’

‘I felt proud when Jeanette told me they had nominated me for the scholarship. When I found out I’d won I felt very honoured. ‘I have not been at all academic, and here’s me winning a scholarship. It means the world to me. I struggle a lot financially and when I fled domestic violence I lost a lot of money so I had to rebuild from scratch.’

‘I didn’t have a lot of money for learning. So winning the scholarship has taken the stress off.’

‘My kids asked me recently why I go to school when I don’t have to. I said “When you go to school when you are older you are learning because you want to. It’s completely different to when you’re younger.” I’ve got a strong sense of my self worth. I don’t want to be a domestic mum who stays home and washes the dishes and lives on a carers pension. I accept that with my children’s disabilities I might have a lifetime of caring in front of me and I might not be able to do paid work but I would love to volunteer with women who have been in domestic violence situations. It would be great to be able to show women who were in the same situation as me to see that someone can go through something horrific and be here years later.’

‘I am a very positive person and I think that the opportunity for learning is in every situation. So you can either be a victim or you can learn a lesson from what you’ve experienced and be empowered. It took a long time for me to learn that.’

As for my brain injury, I don’t view it as a disability anymore. I have the same ability as anyone else to learn, I just have to do it in a different way that my brain can cope with.

‘I have changed so much. Before I struggled to speak to people and leave my house because of trauma and now I catch buses, go out in public, communicate assertively, speak in front of an audience for presentations and believe in myself again.’

Chris has three subjects to complete in her Certificate 4 in Womens Studies and hopes to graduate in April 2021, after which she hopes to go on and do a Certificate in Community Services.

‘I’d love to learn as much as I can. After my first semester, I got the bug for learning. I don’t want to stop now.’