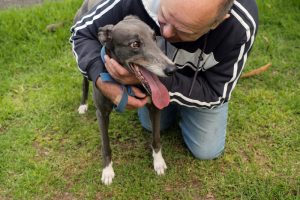 It’s the start of the working day at Mobilong prison and inmates are heading off to spend the day in the bakery, the laundry, the assembly workshop or the gardens. A lucky few begin and end their day at the kennels, caring for and training retired greyhounds before they are adopted into a suitable home.

‘Their first job is to clean the kennels, then do a training session, feed and take the dogs for a walk around the oval or to visit other buildings in the prison to get them used to meeting different people. They do the same again in the afternoons before putting the dogs in for the night. It’s a full time job 7 days a week,’ says Gill Rogers, Greyhound Racing SA prison program officer.

Gill has 40 years experience in training dogs and has been working at Mobilong for just over a year. But she spends more time training the inmates than the dogs. ‘Eighty to ninety per cent of dog training is training of their owners or handlers,’ Gill says.

Prison inmates have to learn what can be unfamiliar skills. ‘The handlers have to have the patience and the understanding to help the dog make the transition and learn what behaviour is expected.’

For the dogs there’s a lot of learning to do. Greyhounds that have spent their lives as racing or breeding dogs haven’t experienced the life of a domestic pet. Their contact with humans has been limited and they’re used to an often unstimulating and regulated environment. The sights, sounds and smells that house dogs are used to can make greyhounds anxious and stressed.

‘They have to learn how to live life outside of a kennel. There are so many day-to-day things that they have never experienced, such as walking in traffic or walking through glass doors. TVs are alien to them, as are microwaves or food always being around and available. Their lives have been highly regulated so simple things like being able to lie quietly on a bed while things happen around them, walking loosely on a lead, or coming when they’re called – many have never learned their own name – are all new and unfamiliar, and potentially frightening for them.’

Caring for and training the greyhounds can be a steep learning curve for their handlers. ‘As a dog trainer I know how to use positive reinforcement methods with animals but if you are someone who hasn’t experienced that kind of teaching in your own life, it’s something you have to learn.

‘A lot of these guys have experienced abusive backgrounds and a lot of negative reinforcement. With the dogs, they have to learn to focus on good behaviour rather than bad.

‘They have to learn to be patient and to take things slowly, to put in time with the dog and to reward behaviour they want to encourage rather than punishing behaviour that’s inappropriate.

‘They have to develop an empathy with the dog and pay close attention to the dog’s body language so they can understand what the dog is feeling and how to respond in a way that relieves the dog’s stress and anxiety, and make it feel safe. Because the dog won’t learn anything if it’s not calm. For many of the men it’s a completely new way of interacting.’

The inmates are diligent. ‘The benefit of working with prisoners is that you have a captive audience who have time to be dedicated to training whereas outside prison you are working with people whose everyday life interrupts their dog training. So it’s much more intensive,’ Gill says. 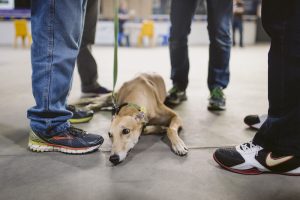 Not surprisingly, the men care deeply for the dogs they look after. ‘It’s important that prisoners don’t over attach to a dog, and all of them have a strong affection for their animal so they have to be prepared for the dog to leave.

‘We prepare them from the beginning for the separation. They all know their time with the dog will be short. And saying goodbye to the first dog is the hardest. They put so much into it. In a male prison no one shows their feelings much but I’ve seen men who are not afraid to yell “I love you” in tears as the dog is leaving.

‘The prisoners involved are always telling me about what a huge difference the dog training has made to the way they feel about themselves; how it helps them take their minds off their problems. They often tell me how they experience feelings of success and pride and how being able to make a difference to the dog’s life makes them feel really good about themselves.’

The staff notice it too. ‘Prison social workers and education officers are very supportive of the program because they see the differences in demeanour and mental health in the handlers. And that improvement starts the moment the dog walks into the prison and is handed to its new handler,’ Gill says.

In its first year of operation, 29 dogs have been successfully adopted out to new homes and there’s a waiting list of prisoners who want to get involved.

‘Once a dog is gone the men all want feedback on how the dog is doing in their new life, they really love that. They keep the cards and pictures of their dogs after they’ve gone.’ Gill Rogers, Greyhound Racing SA prison program officer

Kit Lian Wong, general manager of the prison says the presence of the dogs affects everyone in the prison. ‘You can see how successful the program is in everyday interactions, it really instils a sense of normality and calm to have the dogs around. Ours is an open campus, so prisoners are free to roam with their dogs so having people walking around with their dogs makes it feel like a community. Other prisoners stop to pat the dog, and so do the staff. So it really increases social interaction and creates a neighbourhood feel. 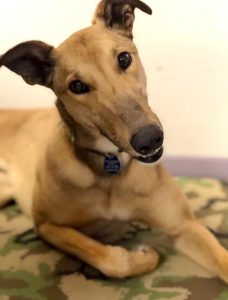 ‘We had one dog called Zeppo who was uncontrollable at first. He couldn’t walk past other dogs without becoming aggressive, he would grab food off the table and wouldn’t respond to commands. But he’s been a real success story. Now he works as a therapy dog at an aged care home on the Eyre Peninsula.

‘Prisoners report that looking after a dog gives them a sense of purpose, something to wake up for each day. The dogs give them unconditional love and that has a big impact on prisoners’ self esteem. You can really see the change in them.

‘Fostering an animal is a journey that the prisoners and the dogs go through together. The men who are selected for the program have to be professional and respectful, they learn life skills about how to socialise and associate with others. In taking on the responsibility to look after a dog each day they establish a routine. For all of them it’s an opportunity to try something completely different and they learn more about themselves as a result.’