Beyond the farm gate 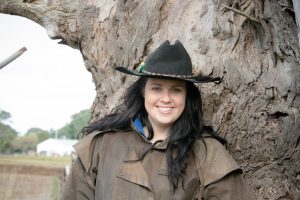 In May 2016 Victorian farmer Karrinjeet Singh- Mahil sat fascinated during a vet’s presentation on calf rearing at a dairy women’s conference in New Zealand when her phone pinged. It was a text message that would change her life. Around the room other women’s phones started going off.

The message was from Fonterra dairy co-operative informing its suppliers it had dropped the price of milk from $5.60 to $1.91 wiping out 70% of Karrinjeet’s family income.

‘With one text message and no warning they grabbed over $100,000 from our budget,’ Karrinjeet says in the short film she has made about the event.

Karrinjeet’s story is one of 24 put together by women farmers as part of a National Centre for Farmer Health (NCFH) project to teach rural women in Victoria how to tell their stories in digital form. The result is ‘From Inside the Farm Gate’ a collection of stories that explore the struggles of life on the farm – from dealing with financial hardship, natural disasters, bereavement and the grief of leaving the farm altogether – and aim to educate, inspire and benefit others living in rural communities.

For Karrinjeet, the aftermath of the Fonterra decision was devastating. ‘When I look back I can’t remember what we did in those days I was so consumed by anger and shock. I was staying at my Mum’s place in New Zealand during the conference and  that night she had a whole bunch of people round to see me before I left but I can’t remember who came to see me off that night, it was all a blur.

‘It took our feet out from under us and we were scrambling to cope. Things were super tight, and for a while we didn’t have a brass razoo. One day at the greengrocer’s my debit card was declined and I had to race round to the Rural Financial Counsellor to get some IGA vouchers. But we sold lots of cows and that kept us going.

‘While my husband Brian’s reaction was to doubt himself, mine was to get really, really angry. I’ve never had issues with my blood pressure before but it shot up and I had to go on medication to keep it under control. Brian lost his voice, he says it’s not related to stress but I think it is.’

Karrinjeet’s digital story turns on the moment she realised something had to change. ‘One day Brian and I were in the dairy and he asked me a question and I just barked an answer back at him. He said, “Did you hear the way you just spoke to me? I’m not the one you should be angry with.” And I was about to snap back but I stopped myself and I thought, “Yes, he’s right”.

‘That was when I thought I need to come up with some strategies for handling this. And we began to fight back.’ 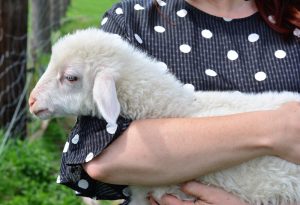 Karrinjeet has learned ways of finding joy in the everyday to counter the stress of hard times. She’s taken to hugging loved ones and wearing her headphones and singing along to music that lifts her spirits as she goes about her daily chores, milking cows and tending to the garden.

But the joy of giving has been a revelation. She gathers excess vegetables from her own and others’ gardens and donates them along with her fresh eggs to other farmers doing it hard.

‘It doesn’t matter if you’ve got nothing yourself it feels so wonderful to give. People have said to me, “You could sell those eggs” and I could but I just find I get more out of it by giving them away. Giving to others has been enormously healing for me. It’s hard to put into words but it gives me energy to do more. Focussing on what you’ve lost saps the life out of you. Turning it around and helping other people is extraordinarily powerful.

‘The thing I’d like people to take away from my digital story is that there are ways to cope and the ways we cope are different for each of us.’

Karrinjeet along with 12 other women created and crafted their digital stories in a three day workshop facilitated by Swinburne University and NCFH. Participants learned how to develop and put together a short film using photos, audio recordings, and video footage.

‘The voices of rural women are missing from past and recent history and this was an opportunity for us to hear those voices and to educate and inspire others by sharing their stories.’ Dr Alison Kennedy, National Centre for Farmer Health.

Dr Alison Kennedy, Research Fellow at Deakin University’s National Centre for Farmer Health says ‘People generally come along to workshops with a desire to use their story to help others, but many don’t realise that it will have benefits for them too. Research shows that enabling people to tell these very personal stories in a supportive environment can have powerful mental health benefits. One woman told me that when she finished her digital story it was like a huge weight had been lifted off her shoulders. So it can have a huge cathartic effect for people who come along. People are quite amazed at the impact of expressing feelings that they’ve carried around and kept to themselves for so long.’

Karrinjeet agrees. ‘After you’ve faced a problem and talked about the worst that could happen it doesn’t hold the same power over you.’

With the first stage of producing the stories complete, the next phase is sharing them with as many rural women as possible both on the web and at meetings and conferences.

‘Shaping that story in the workshop and paring it down to its essence helped me understand
more about myself than I had before.’ Karrinjeet Singh-Mahil

People are often moved to tears when they watch Lyn Kelson’s story of being just 26 with two small children when her husband died by suicide.

‘You didn’t come home so I went to find you. And find you I did, hanging so high,’ she says in her digital story. Lyn says she wanted to tell this story to give hope to others.

‘I think there’s an altruistic element in our telling our stories. When new audiences see them for the first time I think they recognise an element of their own lives and see that they have that same strength in them as the woman whose film they’re watching.

‘My digital story really hit the mark because it shows how we have an inbuilt ability to overcome rather than be engulfed. Life is full of peaks and troughs but the stories show that we have true grit.

‘At my husband’s funeral I recognised then that a number of people were looking at me thinking “Thank God it’s not me”. But I remember thinking even then that others have done this before me and survived and I can do the same. When things were hard I saw opportunity through that loss that there could be some good to come out of it.

‘I wanted to do the course because I had lived through a tough time, and I thought in telling the story I could give hope to others through my own lived experience.’ Lyn Kelson

‘After my husband died, the community rallied around me. That’s a strong thread in all the stories, how vital a cohesive community is in times of hardship, how it forms a backbone when you need it, whether it’s financial or emotional.

‘People cared for me, for us. It was like a lobster when it’s injured has to grow a new shell and until it does it’s vulnerable. In my case the community protected me until I’d grown a new shell.

‘I think it is so important for us to share these lived experiences and to show that we can grow through hardship. Resilience is a skill that is so vital for today.

‘I am so proud to be involved in this NCFH project. It was a huge learning curve. Meeting that wonderful group of women where we created a family of people through shared experiences and then filtering our stories out to the wider community has been fabulous.

‘The course was so well thought through, so well coordinated and delivered, and the care afterwards has been great. The facilitators were really great at establishing a transparent and trusting environment so there was this openness and honesty and acceptance that really helped that process along.

‘There were tears for a lot of us in revisiting those events, as we remembered the loss of a loved one or the loss of financial capacity, but it was worth it.’

‘The technology of using the computer and video programs was a bit daunting but the facilitators offered great support. And even when I had to wait for someone to come and help me that time was never wasted because at the same time I was learning the techniques of video production and having these wonderful conversations with other women.

‘At the end of the three days we sat and watched each others’ stories. There were 8 or 9 finished videos and you could see the pride in the women’s faces and we all recognised that we are all quite remarkable women, even though when we all arrived we felt we were just ordinary. But watching those videos we could see that “Hey, we are really something quite special.”’

From Inside the Farm Gate is funded by the Victorian Women’s Trust and the William Buckland Foundation and project support was provided by Swinburne University, Southwest TAFE and the Western District Health Service. You can view and comment on the stories online.
farmerhealth.org.au/inside-farm-gate