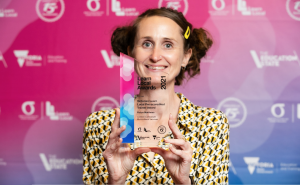 The award winning ‘Starting Work in Australia – Karen Engineering Studies’ program is a unique collaboration between a Bendigo Learn Local and TAFE.

‘The program started when a network of employers and Job Services Providers identified that there were quite a few manufacturing firms experiencing a real shortage of people working in the field of engineering. Not just qualified engineers but welders, fitters and turners and tradies.

‘And we knew that having a skill or a trade is something refugees and migrants really value. So we asked the community if they would be interested in doing some training.’

With strong community interest it wasn’t a straightforward case of enrolling Karen students in the TAFE certificate. If the students were going to succeed, additional language support would be crucial in helping them undertake training that involves technical terminology.

Working with other local organisations including Bendigo TAFE and local JobActive centres LCMS designed a program that combined a Certificate II in Engineering Studies with a tailored ‘Starting work in Australia’ component.

The course has been a resounding success. Six of the 12 students have gained apprenticeships, four are working in manufacturing and two have returned to high school to complete year 12.

Getting the program off the ground took ‘a power of work’ and commitment from all the organisations involved according to Paul Stagg, Manager, Skills and Jobs Centre, Bendigo TAFE . ‘The whole project was full of people who wanted to see those disadvantaged communities get a chance at something better. We were a group of like-minded people who worked as one and had a single focus.’

‘When it comes to aspirations I believe that if you can’t see it you can’t do it,’ Paul says. ‘The majority of people in the Karen community would not have seen a file or drill in their lives. So we took a group out to a range of manufacturing firms in Bendigo and showed them what manufacturing engineering looked like. We took them through TAFE and into the Engineering Department and around the workshops. So that took away a lot of those fears and anxieties that they might have had about walking through TAFE’s doors and into that environment.’

Part way into the course COVID struck. Unable to attend campus, the risk of students becoming disengaged was high. But LCMS stepped in to provide digital literacy training and support so students could study remotely.

‘LCMS played a really key part. It goes to show how effective and important those wraparound services are,’ Paul says.

‘I haven’t done a lot of research but from what I have done this kind of program doesn’t seem to have been done before — much to my amazement.’

‘My hope is that one day bilingual support will be key instrument in VET training, where individuals from CALD backgrounds can take on combined English and vocational skills so that they have a significantly better chance of being employed.’

Numeracy as important as English

Robyn Matthews ran the one day a week ‘Starting Work in Australia’ component alongside a bilingual support worker funded by a grant from the Victorian Department of Premier and Cabinet.

‘We began the course with pre emptive learning picking out terminology from textbooks so that participants could pick up the kinds of concepts used in the industry. The bilingual support worker was great at encouraging them and establishing that they understood.’ Robyn says.

But the emphasis on English language morphed into something completely different when Robyn realised the limits of students’ numeracy. ‘The Karen community have usually attended school within camps and learned basic maths but things they need for welding like estimating size quickly, and understanding and calculating surface area and circumference are often new concepts.

‘When you’re teaching a language, it can be hard to know how much the students have retained but with maths you can see when they grasp it immediately. It’s yes or no. So that was very satisfying. I love numbers and they’ve always been a passion for me so I was very excited to be teaching it. It was really fun and brought a lot of challenge into the classroom.

‘And it was fantastic to watch their confidence grow. They learned to tell the difference between 3 centimetres and 30 centimetres and look at a door and estimate its height or look at a screw and estimate its size. By the end of the course, they could look at a 3D object and find ways to calculate its surface area. Their confidence soared. And that improved understanding translates into them being better welders. They can create objects more efficiently and more accurately.’

Yeah Min Soe, 26, has been living in Bendigo for three years.

He completed year 10 in Thailand and loved school so he looked forward to the TAFE course and the chance to learn skills that would help him find a better job. ‘I wasn’t nervous about studying, I was really excited.’

Within days of graduating, Yeah Min had a job as an apprentice at Central Victorian Welding and Fabrication and it’s been a really positive experience. ‘They were very welcoming at work and I’m so happy to have a job.’

He is about to begin the second year of his apprenticeship and although it’s hard work he is enjoying it. And he’s continuing to improve his language skills. ‘My English is getting better all the time.’

Yeah Min says having a trade and a job he enjoys has helped him feel settled and he is looking forward to the future.

‘They are thrilled to have completed the training and have jobs in the industry. They’re loving it. It was their dream job so to be able to make that a reality is amazing for them.’

‘We find that having a skill or a trade is something refugees and migrants really value — a lot more than we tend to. Now there’s a large waiting list for the second round and community interest for a course in electrical engineering, another in painting.

‘The success of this course is allowing the community to dream. Many haven’t been able to think about tertiary education because of the entrance requirements and even with good spoken English many of them would not make it through because there’s so little support so a lot don’t let themselves dream. This course has shown them that they don’t have to think short term, that a career is possible. They are very proud of themselves.’

Robyn says the development of the course highlights a much broader issue that needs attention. ‘We’d love to stimulate discussion around the needs of students from CALD backgrounds being taken into account in tertiary education.’

‘They are wonderful employees and all the local employers are asking for more.’ Robyn Matthews, Team Leader, LCMS.

Simon Harris, Lead Educator, Engineering at Bendigo TAFE says the course has been a great learning experience for the teachers who were initially nervous at the prospect of using a translator in the classroom.

‘It was a little a bit out of our comfort zone. Traditionally we have a model where we stand up the front and give a heap of instructions and away the students go. But we had to be a little bit more precise and keep instructions fairly simple and work at a slower pace to ensure that everyone knew what was going on to keep a safe learning environment.’

Then there was the pressure of running something that hadn’t been done before. ‘It made it more daunting that we were taking on something so new. We had to make sure we didn’t fail. We didn’t want to set these Karen guys up for failure because that would be really disappointing and would put a roadblock into their transition into working life in Australia.’

Communicating using the language of engineering was a challenge. ‘Even the translator didn’t understand some of the terminology so that made it tricky. But Maha the bilingual support worker was fantastic.’

Simon says he’s very proud of the teachers involved. ‘They really enjoyed it once they got into the swing of it and found it really rewarding.’

‘We would have really struggled without the partnership of the other stakeholders particularly LCMS and the Skills and Job Centre. The support and the encouragement we got through working with LCMS enabled the program to be a success. They were the glue that held everything together.’