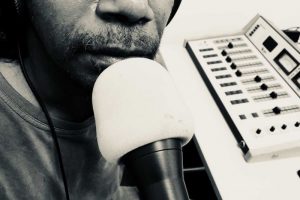 For a radio show that comes out of a remote prison in far northern WA, WKRP is upbeat and lighthearted.

Radio hosts including ‘Leon Keep on Keeping on’, ‘Ann in the Can’, ‘Black Rose’, ‘Cody Custer the Bullduster’ and ‘Deadly Doctor Dee’ trade banter and jokes between songs.

Their names might be fake but the four prisoners at West Kimberley Regional Prison who present each weekly show tell real stories with gusto and good humour and offer advice to their listeners on how to get back on track.

Whether it’s making the most of education, giving up smoking, sharing stories of inspiring women, celebrating International Women’s Day or learning to drive, the show connects with audiences inside and outside the prison fences.

Part of the show’s appeal media trainer Bekah O’Meara says is its authenticity. ‘So many of the prisoners want to use broadcasting as a way to communicate their cautionary tale and tell their stories. If you listen to WKRP you hear only positive messages which is fantastic because we are so often portrayed in the media in a negative light. We need to hear those really good stories about ourselves. We’ve got these amazingly positive things happening every day and amazing Aboriginal people who are doing amazing stuff.’

And it’s touched a nerve. What started as an internal show for around 150 inmates and staff inside the prison is now broadcast to communities throughout the Pilbara and Kimberley and has recently gone national through the National Indigenous Radio Service (NIRS).

Celebrities like Ray Martin, Natalie Imbruglia and Ian ‘Dicko’ Dickson have lent their names to the station promos.

‘Once I realised that teaching media can help our people get that positive exposure, that we can capture and amplify their voices, I really felt like I was on the right track.’

Bekah says the radio show gives inmates experience and skills that open up opportunities on their release. ‘Every community has its own radio station. Once they know how to broadcast and once they have the skills and confidence that’s another avenue for them.’

Being clear from the outset about what’s involved and what the training will deliver helps to offset any nerves.

‘All of them are really motivated to learn but it’s really important for me to say at the start of each term exactly what we’ll be doing and what it’s for. I always make the point that these are skills you’ll take home with you to your community, that you’ll have a certificate, and you’ll have a ready pathway to a job when you get out. Learning is so much easier for adults when they can see the big picture. After you get that across, everything’s really cruisey.’

‘What I really love about community radio and training is that we are helping to give Indigenous people a chance to tell our stories, to have their own voice.’

Bekah teaches broadcasting skills, planning and writing scripts and live interviewing and editing. With the group she explores ways of using radio to celebrate and record Indigenous culture and connect with their communities. ‘We talk about what are the best ways to get old people’s stories and how to record and archive the stories of country and culture because the way our grandparents and great grandparents lived is so different from us and it will be hard to revisit and remember that unless we record it in some way.’

But it’s not just the listeners who benefit from the show.

‘Once you’ve cracked that shell it really brings them out of themselves,’ Bekah says. ‘They are more confident, more likely to speak up and more confident in expressing themselves. At first they want to stick to topics they know or that they are comfortable talking about on air. But once you build trust you can say, “Why don’t you try to do something like this?” And a lot of them surprise themselves because when they first came along they didn’t really know what was involved and they can be quite shy but then they come out of their shell and everyone notices the change.’

Bekah sees her role as facilitator rather than teacher, encouraging people to draw on their own experiences to tell stories that are authentic and connect to listeners. ‘It really builds people’s confidence to use their own stories, it gives them a voice that is so good for Indigenous people to hear.’

Bekah works with the four presenters to put the weekly show together, and the theme often emerges from their discussions. ‘A lot of the time it comes from what they have been thinking about or how they’ve been feeling that week. From there we talk about what angle we might take and how we might script the show. I make sure they get experience in a variety of styles so they get the opportunity to see how different shows work. They get experience in doing a very structured show where they’ve got notes to work from and other times it’s more spontaneous. That kind of exposure to one another’s humour and ways of communicating really builds trust and helps with the on-air chemistry between them.’

Making a difference
Bekah feels fortunate that her boss Brad Spring who established the prison radio program brought her on board.

‘I feel really lucky to be part of the WKRP project. I really love the training. The people are really interesting and diverse and are really keen to do their best. I would love to see that kind of training offered outside the prison – the opportunity to get this kind of education made available more broadly.

‘The great thing about teaching adults is that everyone learns things differently and adults understand how they learn and what works for them. My job is helping them harness their interests.

‘With my work with WKRP I’m feel I’m on track for the kind of change I want to see – giving my people a voice – but I won’t stop until I can see real and lasting change. I want Indigenous people to have a voice within our community and within our nation as well.’

Meanwhile back in the studio
‘You just heard from The Cars with the song Drive and that’s dedicated to all you mob that want to get your licence while you’re here on the inside looking out. Soon you’ll be on the outside looking in won’t you Cody?
‘Yeah, you can say that again.
‘I hope you got the message while you been inside and you don’t come back in a hurry and you don’t come back at all you know. You can’t beat anything better than freedom.’

You can listen to WKRP Radio and Bekah’s radio show Coffee Run 9-11am weekdays on 6DBY.