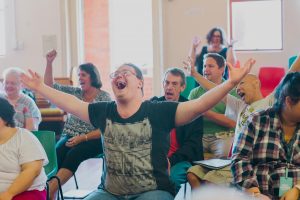 It’s a decade since the Choir of Hard Knocks won our hearts with its uplifting story of how music can turn lives around. All abilities choir Sweet Freedom Singers continue the tradition.

The reality TV show the Choir of Hard Knocks brought a story to our TV of the transformative power of music. The show followed the lives and performances of a group of disadvantaged people brought together by their desire to express themselves through music and song.

Every week in Ashgrove, at a classic 1940s neighbourhood bowls club in a quiet backstreet in Brisbane’s north west, the Sweet Freedom Singers go through a similar transformation. On Wednesday mornings the wooden floors of the hall echoes with the rousing sounds of the Sweet Freedom Singers. Some arrive much earlier than the 10.30 start time because they can’t wait for the session to begin.

The 27-member choir, aged anywhere from 18 to 65, from all walks of life, with many differently abled unite in their shared love of singing.

Much more than the usual choir

Miranda Woods is a neighbourhood centre worker with Brisbane-based Communify. She does the behind-the-scenes facilitation of the choir. Sweet Freedom Singers does much more than your usual choir, she says.

Unlike the Choir of Hard Knocks, Sweet Freedom Singers don’t do covers. All of their songs are originals, a collaborative effort between musicians and singers who compose and write the lyrics together.

Sweet Freedom Singers are led by songwriters and performers Brian Procopis and David Crane who, passionate about writing original music and songs, engage everyone in the songwriting process. Together they write songs with and about members of the choir.

‘When they’re writing a song about someone in the group Brian and David will ask, “What will we write about?” Everyone knows each other so well that other people are likely to pipe up. I know that he loves the broncos because he’s always wearing a broncos footy jumper” so they use context and clues and work that information into the songs.’

‘It’s not just about coming along to sing, it’s about encouraging people to express their identity, communicating through music, telling stories through music. And what better way to do that than to sing your own songs?’ Miranda Woods Neighbourhood Centre Worker, Communify

Justin who plays air guitar loves rock and roll so it’s a no-brainer that his song would be rock. Nicky loves rap so she wanted to be known in her song as rap singer Nicky T.

Many of their songs explore aspects of their own lives. ‘One song is called ‘I Love My Life’ which challenges notions about people lives lacking because they are living with disability. Another song is about some of the challenges of living with a disability, which is a song that is largely about other people’s negative perceptions.’

And it’s a joy to watch when the choir sings a song that’s been written specifically about one person Miranda says.

Accommodating a wide range of abilities means coming up with different strategies so everyone feels included. ‘David and Brian always find a way for people to participate. Emily is one of the non-verbal members who participates in a different way to the singing members. David and Brian have a great box of tricks – harmonicas, maracas, and hand-held instruments that are designed to be easy to hold.

Connecting with one another through song

Communify took over the choir, which had been going for 8 years, when it lost its funding two years ago.

‘It was a great program with a very good retention rate and everyone involved was devastated at the thought of it not continuing. One of the volunteers involved mentioned it to Karen our CEO who said, as she always does, “We’ll deal with it”. So Communify took over responsibility for the choir and I put my hand up to facilitate it,’ Miranda says.

‘Before they came to us Sweet Freedom Singers were led by a choir conductor who organised the choir in a more traditional way, teaching harmony-singing with members organised by their vocal range. Since that time, we have evolved into a different model. Brian and David lead the singing and the supporting musicians on keyboard, bongos, guitar and drums. They like to think of the whole choir as one big band.’

‘It’s such a popular program that no one drops out,’ Miranda says. ‘There’s usually someone new every week so we always have a welcome song for a new face where people sing the ‘Say My Name’ song and go round and introduce themselves and everyone has to sing their name back. It’s a great way to learn names.

‘The NDIS has made access easier so people with NDIS packages can participate in more community activities. Our choir membership doubled because people could come along with a support worker.’ Miranda Woods Neighbourhood Centre Worker, Communify

But the session is demanding. ‘It’s two full hours of singing. It takes lots of practice to learn new songs and rehearse old ones. The choir has close to 40 songs in total. Everyone learns all the songs.’

‘Someone always wants to sing their song. But they have to learn to share and take turns and practise patience.

‘It’s not for everyone. It is 3 hours where you have to be willing to participate, to sit down, to be quiet when others are singing, and to take turns. But if someone’s really keen, we make it work. 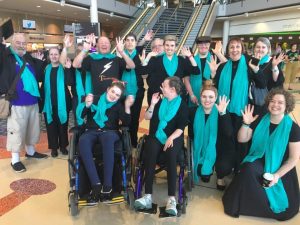 ‘The learning goes both ways. People of different abilities are teaching us about the variety and flexibility of communicating and skills like tolerance and compassion. Everyone’s always learning that’s for sure.’

Kylie Deane is 39 and has been with Sweet Freedom Singers for eight years.

‘We have people with autism, Downs Syndrome, homeless people and people who are disadvantaged who are part of Sweet Freedom Singers.

‘I always feel excited when I arrive but tired when it’s over. There’s lots to learn and do.

‘I’ve changed since I started. I’m more confident and happier. I notice that other people have changed too. They are friendlier and happier than when they started.

I have my own song. It’s about how five years ago I moved out from living with my mum and into my own house. My song is called Kylie’s Kastle.’