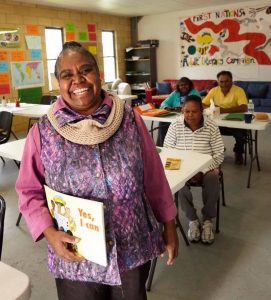 A three year study of Indigenous adult literacy program ‘Yes I Can!’ explores the impact of improved literacy on people’s health.

More than 40% of Indigenous adults have low English literacy with the figure as high as 70% in some remote areas. Low rates of adult literacy go hand in hand with poorer health and wellbeing not just in Australia but throughout the world. So how have adult literacy programs for Indigenous Australians affected the health of the people who’ve taken part?

The researchers set out to evaluate the Literacy for Life Foundation (LFLF)’s ‘Yes I Can!’ campaign. Established in 2012 the campaign based on a Cuban mass teaching method aimed to lift adult literacy rates in the remote town of Wilcannia in western New South Wales. Since the success of the Wilcannia pilot, which boasts a retention rate four times higher than similar programs, the ‘Yes I Can!’ campaign has been rolled out in another seven remote communities as well as in suburban Sydney.

‘Adult literacy is one of the strongest predictors of life expectancy, although this is not widely recognised, including by policy makers in Australia. Research on disparities in health in England, in the US, in the EU and in the countries of the global south shows that adult literacy is strongly associated with one’s chances of living a longer or a shorter life,’ Toni said.

The ‘Yes I Can!’ campaign begins with getting the community onboard and recruiting, then follows three months of literacy classes, and another two to three months for participants to consolidate their confidence and skills, doing work experience, visiting local employers and learning about local services. The aim is to establish a flourishing culture of literacy that will continue to improve the lives of individuals as well as the community. ‘The Commonwealth has attempted to improve the health of Aboriginal people through an emphasis on financial factors with policies aimed at improving access to employment, school attendance and retention, and community safety and so on. However, adult literacy has never been identified as something in the lives of Aboriginal people that should be targeted.’

The researchers conducted a survey of over 200 people across seven communities who graduated and compared them to other people in those communities who struggled with literacy but did not participate in the campaign. All graduates showed gains in literacy and early results show the program had a powerful impact on people’s self-esteem and self-efficacy.

‘Graduates are significantly more likely to feel confident in speaking up and having a say in their community. They are also more likely to participate in community organisations particularly their local land council. Non graduates on the other hand were far less likely to do this. At an individual level, people who participated in ‘Yes I Can!’ felt empowered.’

Our research suggests that adult literacy is a pathway to progressing Indigenous health and wellbeing in Australia.’

This finding was borne out in a series of wide-ranging interviews with graduates and facilitators (or teachers).

‘Being a participant in the program gave people an extraordinary boost in self-esteem and confidence, which has also been noted internationally. But it has not been noted before in Australian Indigenous communities. It was resoundingly the case in these communities, and translated into an increased sense of agency and preparedness to engage in new activities.

‘For example, a number of people went on to get their drivers licences. (Driving without a licence is a major source of criminal prosecution and reason for incarceration in Aboriginal communities.) Some people were able to use ATMs for the first time, they could use computers and their mobile phones to send messages and go online to get information from government websites. They could read their own mail for the first time. And they were three times more likely than non-participants to be enrolled in local TAFE courses for the first time.

‘We found that people who had been unemployed for a long time began to find work in a range of occupations such as cleaner, gardener, disability carer, council worker, project officer. Although the work was overwhelmingly part time, casual or contract work the more literate they were the more likely they were to be able to access employment’.

The implications of this finding go beyond individual benefits.

‘There’s significant literature that says more collective action by disadvantaged communities improves community health and wellbeing. And we saw that in our research. One community did a remarkable job in improving its aggregate wellbeing by establishing a bushfoods business. Initially it was set up by one of the campaign facilitators and her family, but many more people came on board so it became a collective community activity that benefited many more people than those involved in the adult literacy campaign.

‘Another example is a community who is working with a major peak body to establish a women’s health centre to provide services and resources for women and families in the face of high rates of domestic violence and ill health. It’s a great example of how improving the literacy of women is key because it influences everyone else in the community and in the family, because the kids will follow in her footsteps.’

‘Current steps for a parliamentary mechanism for Indigenous participation and a treaty will struggle if people are not literate. The democratic process goes beyond parliamentary instruments. It depends on the meaningful participation of constituencies which requires literacy as a minimum.’

‘The ‘Yes I Can!’ campaign is a great vehicle for promoting First Nations peoples’ self-determination but it needs solid resourcing. It needs to be linked with other sectors and connected with other agencies that can engage with graduates along pathways that open up rewarding and empowered lives.’