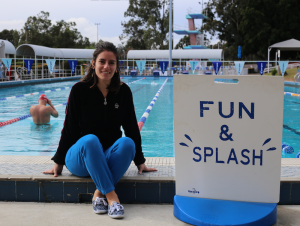 When she arrived in Sydney as a refugee from Syria in February 2018, Sophie Bejok fell in love with Manly beach. Now she’s got her sights set on being a lifeguard.

It’s just before midday Monday at Leichardt Aquatic Centre and 27 year old Sophie Bejok, her mother and grandmother have arrived with 17 other refugees from Syria, Iran and Iraq for their weekly learn-to-swim class.

As a girl growing up in Aleppo, Sophie spent many weekends swimming at local pools and beaches. It was a family outing that she associates with happy times before civil war devastated the city and her family were forced to flee.

In Syria swimming had been an enjoyable hobby. Now in Australia she wanted to become expert. ‘In Aleppo we swam for fun but here we have to take it more seriously because it’s about safety,’ Sophie says.

With one in four drowning deaths in Australia involving people who were born overseas, and with summer fast approaching, Royal Life Saving is calling for everyone to brush up on their swimming and lifesaving skills, especially overseas-born Australians.

When Sophie first heard about the swimming class at an orientation for newly arrived refugees she jumped at the chance. ‘I thought, “Yes!” I was really excited.’

Sophie’s pleased with her progress. ‘I’ve learned the right techniques and I’m swimming the right way now and much more efficiently.’

The classes are a joint initiative of Settlement Services International, the Justice and Peace Office Catholic Archdiocese of Sydney and Inner West Council, all of which are committed to welcoming refugees to Sydney’s inner west. Each week the Council bus collects the group from their outer western suburb of Liverpool and drives them 30km to Leichardt.

For Sophie the classes are a chance to do much more than improve her technique. ‘It was also a chance meet new people and improve my English. In Syria I learnt English grammar but I didn’t have much chance to practise and listen and speak it. Also I wanted to discover new areas of Sydney. And Leichardt is a really stunning area so it has been wonderful to see a part of Sydney I hadn’t seen before.’

Her swimming has improved so much she’s graduated to an advanced class and wants to work as a lifeguard.

‘I love swimming so it wouldn’t feel like a job. It would be great to work at something I love and have fun. I speak Arabic as well as English so it would really help other Arabic speaking people at the beach if I can speak to them and help them understand water safety in their language.

‘I want to give back to the community here in Australia. And this is a great way to do it.

When you move to a new country you have to start from the beginning. Doing these swimming classes, making new friends, meeting new people helps me feel I’m settling in and like Australia is my home.

Moones Mansoubi, coordinator of the Refugee Welcome Centre and whose role is to act as bridge between the agencies involved in the initiative says, ‘Swimming and going to the beach are a big part of Australian culture so it’s a wonderful way to help people participate and feel connected to their new country and it’s so important for them to learn about water safety and life saving skills. The class helps people develop confidence in a new country.’

‘As part of their orientation we tell people who have newly arrived about a range of activities that are available. We’ve found that newcomers really welcome the idea of learn to swim classes,’ Moones says.

‘The refugees involved love the program. All of them live in Western Sydney so activities that take them out of that area are really welcomed. Many of the people who do the swim class find it difficult to travel so having the council bus pick them up each week solves that problem.

‘They love this space. They feel coming here that they belong to the whole of Sydney not just the area they are living in now. Western Sydney, where they live, is mostly comprised of newly arrived migrants, so in their neighbourhoods they are mostly in touch with people from their own culture. When they go shopping for example, they can converse with shopkeepers and other customers in their own language. But here they have an opportunity to interact with the wider Australian community and they love it.  Travelling to a different area is a great opportunity to practise conversational English and learn new things about their new country. Coming here is like a holiday. It’s a place they would not come to by themselves and they tell me how much they look forward to the class on Monday.

The class gives them positive energy, they can forget their problems. It’s fun and they feel they are improving. Water is calming and it is a great opportunity to improve their health and wellbeing. It’s a healing process.

‘I can see the positive effect it has on their mental health and wellbeing. Particularly for people seeking asylum it’s a wonderful activity to take part in, it’s something to look forward to at a time when they face so many challenges. It’s a big relief to spend time doing something so enjoyable.

‘The inner west is not multicultural in the way that Liverpool is. The majority of people are second generation migrants. Having newcomers in the inner west benefits locals as well. There are other community members using the pool at the same time. I notice now how both groups smile a lot more and feel more comfortable with each other. You can really see the difference. Locals are accepting and welcoming.

‘The teachers get a better understanding of refugees, and other people who use the pool at the same time do too. They realise that refugees are not aliens. They are humans like all of us, and it doesn’t matter what language you speak, we are the same.

‘It’s much better to get newcomers to engage in activities in their new home as soon as possible. Helping people feel connected and safe and feel like they belong is so important and this swim class really helps with that. It really facilitates the process of settling in. It’s fantastic.

‘They feel a sense of belonging at the pool and in that local area and as a result they engage in a number of different activities at the Welcome Centre. So it’s opened them up to new opportunities and experiences.’