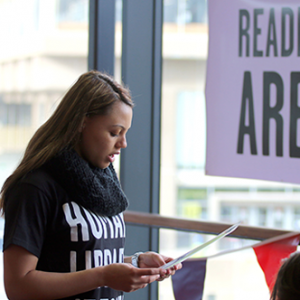 The first Human Library in Australia – where you can ‘borrow’ people instead of books – is flourishing in Lismore, New South Wales.

The worldwide movement in which human books are loaned out to tell people their stories began in Denmark in 2000 and has proved a powerful way to break down prejudice and build empathy and compassion.

At Lismore among the human books you can take out on loan are a submarine captain, a homeless person, a local historian, and a Sudanese refugee. All of them will tell you their fascinating life story.

Lucy Kinsley, Area Librarian at Richmond Tweed Regional Library, kicked off the first Human Library at the Lismore branch in 2007 as a one-off event. ‘It was amazing, it was packed!’ It was so popular that the library made it a regular monthly event and expanded the range of books for loan. The service has been made mobile – visiting schools, community events and other libraries in NSW and interstate.

Currently the library has 25 human books for loan. Human books are trained before they’re ready to be borrowed. “We get them to talk to other books about their experiences. We also tell people they only have to answer questions they want to answer. It’s their story, their life. So we teach them to say if necessary, “I’m sorry, that chapter’s closed.”’

So what makes a bestseller? ‘Bestsellers are people with interesting, different stories. For example we have a Sudanese man who is very popular. He tells people his first hand account of life during war and how he walked through two African states and his long journey to life here in Australia.’ He’s Lucy’s favourite book too. ‘He’s brought up his family, his younger brothers and sisters, and he’s studying too. He’s an inspiration.

‘People volunteer to be books because they think they have something worth sharing or something that they think might help someone else. For example, there’s a woman who shares her experiences of having a child with mental illness. By telling other people about it and about the services and support she was able to get for herself and her child she breaks down the isolation other people in similar situations might be feeling.’

For the books, being part of the Human Library can open doors. ‘Lismore is a multicultural place and it is tolerant of different views but it’s still a small country town and it can be very hard to get in as a local and break down that barrier. So this is a great first step.

‘It’s such a great experience for both books and readers.’

LUZ PRESS has been a Human Book since 2007 and has been borrowed hundreds of times since then. ‘It’s a way of giving back to the community and making people aware of what life is like for a migrant in a new country.’

Luz’s story is about the Philippines and its people. Luz says despite the big Filipino community in and around Lismore local people seem to know little about the country or its culture.

In her 30 minutes, Luz covers three topics. ‘One, how Filipino people live, eat, care for their elderly, and the education and social security system. Second, I emphasise that Filipino people are like everyone else: regardless of colour or religion, we want to be respected and like to be heard. Lastly, I give people recipes and food to taste. I make chicken adobo cooked with garlic and ginger, it’s very good. And for most people it’s a new taste because our cooking is different, it a blend of different influences, including the Spanish.

‘Sometimes with readers it’s a two-way process where they ask me questions and we go back and forth. It’s great when people learn about my culture and country.’

Luz recommends being a human book. ‘It’s good to participate and not just be an observer. It’s a great way for people to understand that the different stories we tell make us unique as individuals.’

ROZ RODEN borrowed her first human book in 2014 after she moved out of town and found herself missing the company. ‘I went from working in a socially demanding position in the community to working alone on my farm, pulling out lantana and finding myself very socially isolated.’

Having spent a long time living in Sydney she missed its diversity of culture. The first human book she borrowed was Luz Press.

‘After I sat down she said “You can ask me anything you like.” I asked lots of questions and she was very forthcoming and open about her life.

‘I found her pride in her history and culture invigorating. She told me how European trade and missionaries moved through the Philippines and how society changed as a result. She had done a lot of research on the historical background of her own personal story and it was fascinating. She had a map of the Philippines and I had no idea it was made up of so many islands.’

Roz subsequently borrowed a second book, a man living with HIV. ‘I’d only really known of HIV as being a death sentence from the 1980’s but now because of changes to medication it’s a matter of living and managing the illness and having hope and a fruitful life. So it was great for me to get that perspective.

‘The man had this real commitment to getting the message out there to support people in the same situation. I thought he was a very brave and noble person. He was so honest with me.

‘You have a more emotional reaction to a human book. With a human book there’s the physical experience – the eye contact and body language makes it more powerful.’