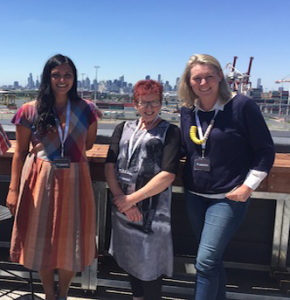 Woodend Neighbourhood House’s idea for a social enterprise to tackle social isolation in the small Victorian town just got a step closer to reality.

Imagine a dreary mid-winter’s day in the small country township of Woodend. You hurry down a deserted and cold street and open the door to an old warehouse. Inside it’s warm and cosy. A busy café staffed by unemployed young people is serving delicious, cheap food and coffee. In a corner, a volunteer reads children stories while parents and carers sit around tables having a break and catching up with new friends. People who usually work from home are working at their laptops, and a sewing group sets up their machines to make free community shopping bags.  After school, the place turns into a Job Ready training centre, homework club, and youth space. At night, evening commuters just off the train call in for open mic sessions, or to catch a movie or class.

‘It was like “Shark Tank” except we didn’t ask for money,’ Angela says. ‘I had to practise and practise to get it right.’

Clearly she hit the mark. Woodend Neighbourhood House was one of the 10 projects selected from 18 projects pitched. 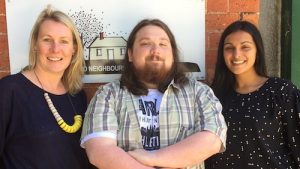 Angela and her team have just embarked on the four-month training program in Melbourne enabling them to develop the business skills and networks to refine and validate their business model and turn their vision into reality.

Social Traders choose projects that tackle a social problem, are commercially viable and use at least half of their profits towards their social mission. Social Traders aims to break the cycle of disadvantage through social enterprise and believes in the power of social enterprises in creating employment, providing access to services and strengthening local communities.

The Crunch Accelerator program helps organisations to build their business, understand their customers and how to generate social impact.

Each project team attends workshops, is mentored by someone from the corporate or start-up world, receives individual coaching from Social Traders and business analysis from MBA students at Melbourne Business School. They also have the opportunity to meet and learn from Crunch alumni.

Other Crunch projects include an employment program for migrant and refugee women, access to nutritional food for the homeless, and assistance for people facing issues in the workforce.

For Angela a chance invitation to see visiting American Jim Diers talk about the power of neighbourhoods gave her the spark of an idea. ‘He was all about letting the community work out what they want together. It really inspired me.’

Angela took her idea back to the Neighbourhood House. ‘I’ve got two fantastic volunteers working with me, Nayan Puri who has a background in architecture and sustainability and Patrick Hocking who is in his early 20s and has really opened our eyes to the people our Neighbourhood House doesn’t connect with. He’s the one that pointed out that there’s a mass exodus of young people from Woodend. It’s not an attractive place for people in their 20s. There’s nothing to do, so even though they love growing up here they don’t stay. But there’s an influx of people in their mid 30s who return to the area to bring their children up here.

‘The goal of our social enterprise is to reduce isolation in the community. Our goal is to help people who are socially isolated to develop meaningful friendships. It’s OK if you’re an extrovert but if you’re not it can be really hard to make new friends.

‘We want to get people out of their houses. We know the cost of loneliness and the prevalence of mental health problems Australia wide. A lot of people in Woodend are people on their own at home or caring for small children.

‘Research shows that 33% of people in Woodend are involved in unpaid child care, which is much higher than the state average of 24% so we’re looking at what facilities or services there are for people on limited incomes and for people looking after children. What things are there to do in Woodend that are cheap, good for the adults and good for the kids? In summer it’s not a problem because we have a terrific pool and park but in winter it’s a different story. We also want to know if you’re a carer looking after someone with a disability or an elderly relative and you want to go out, what options are available for you?

‘Our initial idea was to turn a disused warehouse into a space that meets the needs of the people in our community.’ Angela first heard about the Crunch program just a week before the close of applications. With not long to the deadline the three worked hard on fleshing out their proposal and turning it into a compelling pitch.

The Social Traders’ Crunch Start up Accelerator program began with the first of six workshops in early February. ‘To get the opportunity for training of this calibre is absolutely amazing.  We have a fabulous mentor in Megan McDonald, who is a manager of Customer Experience from Australia Post.  We have a terrific relationship that I’m sure will continue long after the Crunch program is over. We call on her advice and she’s opened our eyes to a whole new world, especially when it comes to research.’

First up they are refining and testing their idea through research with their community. ‘We are trying to be “solution agnostic” at the moment, just focussing on understanding the problem rather than jumping to a solution. With Megan’s advice we started by talking to 60 people at the Farmers Market, then we will do some in-depth interviews, followed by a survey of our members. The survey asks people how they spend their week, what interests they have, what their typical week in summer and winter looks like, how long they’ve lived in Woodend and what makes them happy and what makes them miserable about Woodend. We also ask them how connected they are already. One indicator we use is asking people “Is there someone in your neighbourhood who you could ring in the middle of the night and ask for help if you needed it?”

The Crunch program might have just begun but to Angela there’s a curious sense of déjà vu. ‘Woodend Neighbourhood House was founded 34 years ago after the Ash Wednesday bushfires by a group of women who wanted somewhere to meet and learn from each other and rebuild their community, so it’s in our DNA.’

Over the past six years, Social Traders’ Crunch has supported 88 enterprises with 60% currently trading.  Social Traders aims to grow the number of sustainable social enterprises in Australia and by 2020, deliver Crunch to another 200 enterprises assisting them to start and grow.