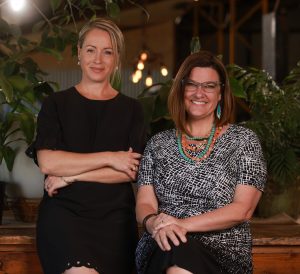 A prison based graphic design program aims to give ex-offenders a career path out of prison and help to break the cycle of re-offending.

When ‘Nathan’ was jailed in 2018 he was dismayed by how few opportunities were available for education or rehabilitation in the high security Queensland prison.

‘It was a bit of a shock to sit there in my cell and realise there was no means of addressing the issues that got me there in the first place. It was very depressing.’

It was his first time in jail and he had a three year stretch ahead. ‘It’s challenging to get through each day. You feel like you’ve been locked away and forgotten about.’

The prison-based program is the brainchild of Kelly Willmott and Amanda Shepherd (pictured), directors of Brisbane-based creative agency and social enterprise Green Fox Studio, which works across the design, media and advertising industries.

Kelly and Amanda established the not for profit inprison training facility in Queensland in 2019 to train and employ inmates, giving them experience in realworld creative projects. Selected prisoners are offered the opportunity to work for Green Fox Studio upon release to maximise their chances of rehabilitation.

With a head for maths and numbers rather than art and design, Nathan’s expectations of the training were low. ‘At best I thought it might be cool but not something that was going to help me much.’

The 12-week program acts as a screening device for Amanda and Kelly to identify which participants have the talent and perseverance to take on a role in the working studio where they can develop and nurture their skills.

Nathan surprised himself by learning a lot about design and by how much he enjoyed the training. He was selected to be part of a team of 10 prisoners that ran the working studio, with help from Amanda and Kelly on the outside, taking on work for external clients.

‘They gave us a lot of autonomy and because we all worked together for so long we fostered this workplace environment that was terrific. The core team was incredible.’

Prisoners in the team worked as designers, animators, virtual reality experts and coders on a range of marketing and advertising design projects for corporate and government clients.

Nathan spent almost three years in a project management role where he liaised with external clients and ensured that the team had the capability and resources to reliably complete the job.

‘We were supported to learn and do as much as we wanted and a lot of us were given opportunities that we might not have ever considered before.’

Using their combined expertise, the group navigated the limitations of working in the closed prison system to produce work as good as that produced by professional graphic design studios outside.

‘The ten of us in the core team came from all different backgrounds so we really put our heads together and came up with solutions to interesting problems.’

They worked five days a week in the studio but had a lot of distraction-free time in between to mull things over.

‘Our entire lives were focussed around this program. We had a lot of different ideas when we weren’t in the studio. We’d come back after a weekend or even a weekday having thought about a whole bunch of problems and we’d often find a solution super quickly because it was our sole focus.’

‘When you can see a prisoner who lives and breathes their work and loves what they are doing, you know you’ve got a designer. Often they haven’t seen that capability in themselves before or haven’t allowed themselves to dream about it.So it’s wonderful to see them working on professional jobs for real clients.’ Kelly Willmott

Nathan says mentoring other prisoners in the studio changed him. ‘I didn’t really understand crime and its consequences before I went into prison. I was very naïve. I had no experience of criminals or prisoners and I guess before I went to prison I would have written off those kinds of people as hopeless but I learned a lot from Amanda and Kelly and you realise that everyone’s a human being.

‘Everyone has circumstances that have led them to where they are and as a society we are obligated to do what we can to help people help themselves. Realising that and developing that compassion and empathy was something I really developed over the years, and more and more I advocate for change in this area because it’s so important.’

Nathan saw how much of an impact the program had on others too.

‘If you’ve suffered abuse or come into prison because of really ugly circumstances looking at a career or thinking about a career is often the last thing on your mind. You’re much more focussed on just surviving or coping. So watching people realise that they might have some sort of different future and working towards that was really valuable and a key part of the program.’

‘Michael’ has found a job he loves

‘Michael’, 39, was halfway through his five-year jail term when Green Fox Training Studio started up in his prison. ‘It was a lifeline for me,’ he says.

Up until then, time passed slowly and tension among inmates was high.

‘It’s pretty bad inside. There’s trouble and dramas every day and you can’t get away from that.’

Michael signed up for the training because he wanted to develop a hobby and a way to pass the time.

He had started a Certificate 1 in IT after he finished school but dropped out and worked in a factory.

He expected to learn how to use different Adobe programs but when he was introduced to the 3D and animation program called Blender, he discovered creativity he never knew he had.

‘It just got me. I was hooked. I couldn’t stop thinking about it once I got back to my cell. I couldn’t wait to get back to work. I loved it. There’d be days when I couldn’t go to the Studio when there was lockdown or restricted movement, and it was just hell to be just stuck in your cell.’

It was a lifesaver, Michael says. ‘I’m more passionate about this than I ever thought I’d be. I love the stuff.’

Learning and working in design, the time passed quickly. ‘I would start working at 8 and then look up and it would be 3 o’clock. I’d say, “Holy crap, there’s a day gone just like that.” 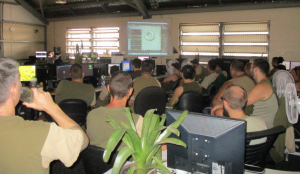 ‘I really fell in love with the work. Having something productive to do; seeing a result and helping people outside, especially real clients, was fantastic.

‘I can’t stress how much of a great mentor Amanda is. When I first started the training with her, she would stop us and say “Let’s take 5 minutes off and think about something we can be grateful for”. She had all these little mindfulness exercises and I’d think “Come on just let us get on with our work” but after a while you see the benefits of it. It saved me through a lot of dramas while I was inside.

‘I’m definitely an introvert by nature but my confidence has really improved. Kelly and Amanda really encourage you to sell yourself and feel confident and promote your work.

‘The Green Fox Training Studio is so important for people in jail because there are people who have talent and don’t even know it. Once you get people like Kelly and Amanda recognising that and pushing that person along and building that confidence it’s bound to give them more opportunities in life rather than going back to crime.’

Michael is out of prison now, working in the design industry and studying IT.

‘I’m so grateful, it’s awesome. I’m very happy. I love what I’m doing now and I wouldn’t change a thing.’