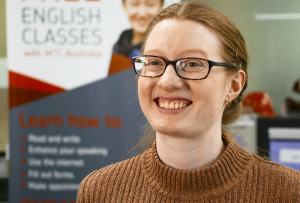 In an Australian first the Connected program is using drama to improve language and communication skills for adults learning English as an additional language.

There’s a buzz in the corridor and two dozen adult students – migrants, refugees and asylum seekers, men and women from countries around the world – hurry excitedly to their English class.

Inside the classroom the usual rows of desks have been pushed back and a circle of chairs has taken its place. The game begins. One man throws a scarf out in front of him like a fishing net, a woman pretends it’s a basketball, another pretends it’s a skirt, then a bag. In the meantime the rest of the group are guessing excitedly, searching for the right English word, exclaiming to one another, ‘What is it? What is it?’

The Connected program is a collaboration between Sydney Theatre Company (STC) and MTC Australia – a not-for-profit employment services and education provider – and uses drama to improve language and communication skills for adult Skills for Education and Employment (SEE) students.

‘They get very excited by the imagination that other students show. It’s like a chain reaction with one student watching another and sparking new ideas. The students absolutely adore that. Some days the classes get quite noisy but then learning is having fun,’ English trainer Kathryn Salman says. 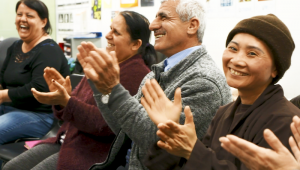 STC Teaching Artist Zoe Hogan team teaches for 6 weeks with MTC trainers who then incorporate drama activities into their normal language classes. ‘It’s a chance for them to work with me and try things out and see what works and what doesn’t,’ Zoe says. And she’s thrilled with the result.

‘What we’ve found is that if you build drama into language teaching you get great results,’ Zoe says.

‘It’s quite a different way of learning English because it’s about dealing with ideas that come up spontaneously. People get so engaged that we will see them have a go at speaking English and using words they haven’t used before, or we will see a shy student much more likely to make that leap to speaking in English because there’s not such a focus on getting things right.

‘It’s a different way of teaching too because it’s not teacher focussed nor teacher led. In the drama workshops everyone is up on their feet talking and afterwards they are motivated to write about it. The process frees them up to take more risks,’ Zoe says.

Pandora’s box
Stories and folktales are engaging narratives. ‘Pandora’s box has wonderful elements – there’s lots of drama and conflict and archetypal characters. There’s a wedding, there’s the drama of receiving a present that you’re not meant to open, the intrigue of guessing what’s inside the box and lots of rich moments to explore through imagination and drama.’

Using body language, facial expressions, and other ways of making meaning that are not just using English words really engages the class.

‘With Pandora’s box it might be as simple as us imagining what she hears when she puts her ear to the box and listens. Then we act out her curiosity at receiving the mysterious wedding gift that she was forbidden to open. What could be inside the box?

‘Later we get students to record different sounds and every one has a go at being Pandora and hearing a recorded sound and reacting as Pandora might react to that sound. It doesn’t require any language and that’s a way to facilitate getting people comfortable in a non-threatening way. The sounds might be music, whispering or animal noises so there’s lots of laughter when the rest of the class hears the sound for the first time and watches Pandora’s reaction, whether the sound makes her want to open the box or throw the box away from her.

‘But we don’t just re-tell the original story. We encourage students to shape the story by incorporating their own ideas about the characters and the decisions they make.

‘The class come up with all sorts of ideas for the kinds of bad things that would come out of the box when Pandora opens it, from awful smells or diseases to violent punches but the last thing that comes out of the box after all these terrible things is hope and, as a class, we use the opportunity to write down what we each hope for and share it. That’s often where they make the links between the story of Pandora and their own life situation.’ 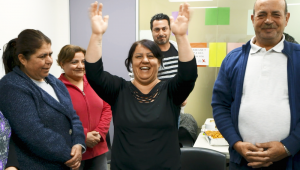 Sharing language
With students ranging in age from 18 to 64 years and from a range of different language groups and countries including Syria, Iran, Vietnam, China, Afghanistan, and more, classes can be a diverse mix. One of the most popular workshop activities is teaching one another vocabulary from different languages.

‘They really love the language share because it acknowledges the knowledge and experience they have and sometimes others in the room aren’t aware of each others’ language backgrounds so to find out where others come from, and what language they speak is really new. We invite students to come up to the board and write a word in their language and in another alphabet and teach us how to say it. Some words can be difficult to say. It’s a situation where the teacher and me are definitely learners so playing with student–teacher dynamic is wonderful I think,’ Zoe says.

Class teacher Kathryn Salman says the workshops have had a big impact on her teaching. ‘Rather than just relying on me to explain things I can hand it over to students and say, “Show me what you mean”. When you are acting out a situation with higher level students I can say “Give me the words that someone might say in this situation”. With lower level students I ask different things. “Is the person in this situation happy or sad?” I can encourage them to think about not just words, but feelings. Because language is about so much more than words, it’s about body language and facial expressions and turn taking and not talking over each other.’

Not that the prospect of a drama class was easy for Kathryn at the start. ‘I am a shy person when I was at school. If the teacher asked me a question I would be shaking like a little leaf. I am still shy but I do tend to talk a lot as a teacher. When the idea of using drama in my classes first came up I was very nervous. Then I thought “What am I scared of? Why would I be scared to stand in front of my class?” So I got over it. It’s made me a better teacher.

‘At the start I said to myself “If I don’t put myself 100% behind this they might not want to do it”. And the students could see that I wanted to try it. And they were thinking, “How can I say no when the teacher is so excited?”

‘I thought it was important to show my students that if I can overcome my nervousness then they can as well.’

‘Drama classes help me with my speaking and listening. I am more confident and very happy.’ Ghuson Shamoon

Despite their initial reservations, Kathryn has noticed big changes in their confidence and willingness to give things a try. ‘They know it doesn’t matter if you make little mistakes. That’s how you learn.

‘I’ve seen the before and after planning that goes into our class parties and how much the students have advanced in their organisational skills, planning, co-ordinating, saying what they need, asking questions and checking with each other and being able to give help to others who need it – they’ve all made huge progress – and it gives them a real sense of belonging.

‘One student will say to another “You spoke English to me and I understood you!” From the look on their faces you could tell it was like the sun had come out for them.’ 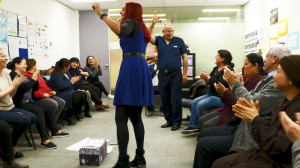 Breaks down barriers
‘The group has become much closer and are a more integrated and fun group. The students are much more respectful of different people and their languages and points of view,’ Kathryn says.

Zoe agrees. ‘At the end of 6 weeks students get to know each other in a way they didn’t know before because we share more of ourselves in drama space. MTC classes are quite mixed in language and background and there’s a tendency for classes to be cliquey – for all Arabic speakers or all Mandarin speakers to stick together in their own groups. But those barriers have broken down and there’s a lot more collaboration and conversation between students.’

‘We loved the school and the teacher. We learnt English and also to respect each other. We are all family here. I thank God.’ Adil Azbo

Evaluation showing results
Western Sydney University Lecturer Dr Rachael Jacobs says the Connected program is having a positive impact on everyone involved. Participants’ literacy and vocabulary are improving and students are more active in classes. ‘People are happier in class and much more engaged. There’s moments of hilarity and lots and lots of joy. One participant said it’s fantastic because you forget your problems and start enjoying yourself.

‘Learning a language can be very very stressful and hard so to bring joy and laughter into that learning environment is wonderful. Some of the participants have never been to school and others are highly qualified professionals such as journalists and surgeons so it’s a very varied group of people but they all find learning a new language very hard. Many haven’t been allowed to play or work imaginatively in their education. The Connected program gives them permission to learn in a new way.’

The Connected program has grown out of School Drama™, a highly successful program the STC has been running for 10 years with 27,000 primary school students and teachers around Australia. The University of Sydney has evaluated School Drama™ extensively over a 10-year period and the model which is robust and based on research has been adapted for adult learners.

‘I absolutely get so much out of being part of it. I cannot imagine not doing it. My university is very proud of the program and the way it’s making positive change in Western Sydney.’

‘I like the drama classes a lot. Everyone has fun. We are very happy and speak more English. I’m not scared to make mistakes in English. My teacher helps me. I want to learn more every day.’ Raad Mansour