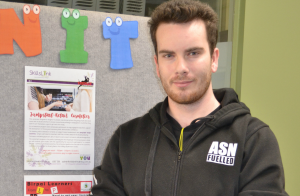 Jake Donohue a student at Port Macquarie Community College was thrilled to win an ALA scholarship to attend an international leadership training program.

‘I was blown away when I was nominated. When I was selected, I was over the moon.’

Jake was one of 23 young people from 30 countries identified as emerging leaders who were accepted into the Asia South Pacific Association for Basic and Adult Education (ASPBAE) Basic Leadership Development course in Auckland.

‘I didn’t know a lot about the course beyond the basics. But I knew I wanted to learn something that I could bring back home to help me realise my goals.’

One of his goals is to help young indigenous people in his community feel a sense of pride in their culture. It’s an experience that Jake has been through, having only recently identified as a young Birpai Aboriginal man. ‘I didn’t acknowledge it because I was afraid of the stigma. A lot of people I knew at school – myself included – saw Aboriginal people in a very negative light.’

A visit by the Clontarf Foundation to Jake’s high school changed all that. ‘Their aim is to help young indigenous men build their confidence and sense of pride in being Aboriginal. It had a big impact on me.’

Apart from applying for a passport, Jake prepared for the course by talking with his Land Council and Aboriginal men’s group about issues and problems in his local community.

‘Many of the young people feel lost, they are still suffering the effects of the Stolen Generation, they feel displaced and have no rights. The local Aboriginal community want to see their children thrive and succeed and I want to be part of that way forward.’

In New Zealand, meeting participants from diverse countries and cultures was a highlight. ‘I learned a lot from the other students and through sharing issues that impact our communities. One Indonesian student talked about how in her community indigenous knowledge is 95% extinct which really brought home to me how important it is that knowledge is passed on.

‘Another thing I took away from it was the importance of international cooperation for common good. I realised how privileged we are to live in such a wealthy nation. The other students really opened my eyes to the role of Australia in the region and its impact on things like aid and relief supplies so I became so much more aware of Australia as being part of an international community.

‘It was great to be able to realise what we can achieve if we all collaborate and build a common future for greater good. And a big part of that progress is identifying the kinds of pathways needed so that everyone has access to education.’

‘It was confronting to see the kinds of problems that plague other countries. It made me a lot more appreciative of what I have.’

After the course was over, Jake spent time with members of the Maori royal family who gave him an immersive taste of their culture and showed him how they were reclaiming their status.

‘I was blown away,’ Jake says. ‘The elders gave me a formal welcome into their nation. They treated me like an honoured visitor which made me feel very proud. They took me to a Maori youth group called ‘Do Good Feel Good’ in Auckland where a lot of local young people are part of gangs, involved in petty theft and crime. The group gets them away from that lifestyle, helps them find jobs, gets them off the streets and gives them role models they can get behind and learn from. That was amazing.

‘I learned that good leaders listen to people around them and take their opinions and objections on board and work with them. That if you do that people will trust you and you’ll achieve so much more. Before the course I could be very quick to make judgements and some would say I was arrogant. But I’ve got more insight now. I’m more observant and more aware of what I do because I know now that it influences people around you.’

The training has made Jake more determined about what he wants to do in the future.

‘I want to be an influencer, I want to play a role in reducing discrimination. I’m hoping that young people in my community will see me as someone whose footsteps they want to follow, someone whose aboriginality was a source of shame but is now a source of pride.’

CEO of ALA Jenny Macaffer says Jake was an excellent contender for the scholarship.

‘Despite having negative academic experiences at school Jake has been an enthusiastic student at Macquarie Community College where he has embraced the opportunities offered through the Entrepreneurship program. His leadership skills have really come to the fore.

‘We chose Jake for the ASPBAE Leadership Program scholarship because of his passion and his desire to keep learning. While he’s not certain what his future holds he does know it will focus on advocating on behalf of other young indigenous people.

‘We are very proud to have awarded Jake the inaugural ALA scholarship. He has really shown great leadership and initiative as an adult learner and he will be a great ambassador for adult and community education in Australia.’