Photos give refugees a voice 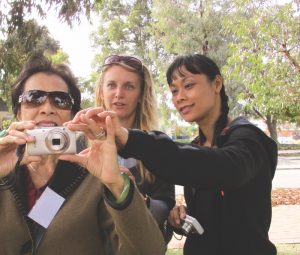 Language barriers, isolation, health problems and discrimination are just some of the obstacles that can make it difficult for refugee women to have a say into resettlement policies that directly affect them. But a Western Australian research project is changing all that.

Research leader Jaya Dantas, Professor of International Health Sciences at Curtin University and her team used Photovoice with refugee women to capture and reflect on their experiences of settling in Australia.

After training by a professional photographer, the women took a series of photos to represent aspects of their lives before and after arriving in Australia.

Sharing their photos with the group and composing captions allowed the women to articulate their experiences in ways they hadn’t done before.

‘The experience of coming together with a range of people from different countries to talk about the pictures they have taken and what they represent about life back then and life now is very powerful. Reflecting on what the picture meant and creating a narrative for it increased their self-awareness. One woman shared a photo of herself driving a car and described how the day she got her licence as “the best day of my life”. It really brought home to her how she had learned new skills, was more able to participate, and showed how she wouldn’t have to be dependent on others.

‘Women don’t want to be dependent, but the whole process of writing a resume, going for an interview, looking for a job is overwhelming. However, many women felt accepted and welcomed in multicultural Australia too, saying, “Life here makes me stronger than I was before”,’ Professor Dontas says.

‘It’s very easy to do household surveys or questionnaires which are anonymous but you don’t know who said what, it’s so impersonal. Often in projects participants’ voices are lost, presented in graphs and pie charts that only educated people can understand.’ Jaya Dantas, Professor of International Health Sciences at Curtin University

Photovoice challenges traditional quantitative research methods used by experts and policy makers. Engaging people whose voices are often unheard in recording and sharing their expertise to help shape decisions that will affect their lives can be a powerful learning experience, Professor Dontas says.

‘It was a transformative experience for the women involved, they learned so much in the process, developing new confidence in a safe and supported environment where we provided child care and translators so they could participate. ‘

As well as learning new skills the women made new friends and really loved the experience.’

Around half of the women opted to include their photos and accompanying stories in a travelling exhibition to all libraries in WA to raise community awareness of refugee womens’ experiences. The exhibition highlights the challenges they face living in Australia, the importance of family and social support, the need for education and employment and the personal strength they need to draw on during resettlement.

Photovoice can be a powerful tool for working with people whose needs are often ignored to gain some sense of control over their lives and to prompt change. Photovoice offers:

• a fun and creative means of self expression

• an effective tool for advocacy – images can make a more powerful case for change to policy and decision makers than words alone • an engaging means of documenting a process or gathering data for an evaluation.