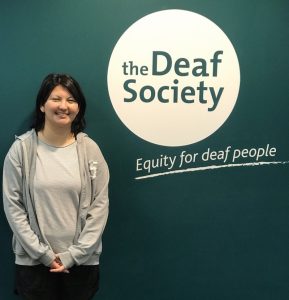 Anita Burfield was born with moderate to severe hearing loss and although she had cochlear implants, she struggled to communicate successfully in either the deaf or hearing worlds. She was withdrawn and shy.

When Anita applied for the School Leaver Employment Supports Program through NDIS at the Deaf Society NSW, she was struggling to work out just what kind of work she was capable of and was pessimistic about her job prospects.

‘I had trouble trusting people and I didn’t talk to people much.’

Mentoring for work and independence

Luckily for Anita she was paired with mentor Sharon Xabregas from Sign Hear who works in partnership with The Deaf Society providing Employment Services. Together they set goals for Anita’s independence and career skills.

‘I didn’t know any Auslan but I decided to give it a try because I could see so many people at the Deaf Society signing and I wanted to be able to express myself and communicate with other people,’ Anita says.

Anita was a diligent student and Sharon organised for her to begin work experience at a nearby café.

Anita was so nervous at the start that Sharon would sit in the café pretending to drink coffee to put Anita at ease. Then she found she could leave her table for an hour at a time, and later for the whole day as Anita’s confidence grew.

‘It was so challenging at first. There were so many different coffee names and some Anita had never heard of like ‘piccolo’.  So we would sit down together and practise how to pronounce them. She put such a lot of effort into that work experience, much more than someone without a disability.

Sharon says, ‘I was sitting outside the café watching her taking orders and I was so blown away by her willingness to face her fear of communicating with random strangers and extremely proud of how she took everything on board and made the most of it. She had been very nervous but then she was surprised by how kind people were and it was such a lovely thing to see.’

Experience in the hearing world

‘She walked out of there with so much more confidence, she really came out of her shell. It made a huge difference and I think she realised her potential. It showed her that she had the ability to work in hospitality in the hearing world.’

‘Getting her out and working with the public and meeting people in courses and through work has made her realise they are like us,’ Sharon says.

‘Anita has seen first hand how people with hearing loss can do what hearing people do.’

‘I’ve been involved in employment services work for 14 years, often breaking barriers myself,’ Sharon says. ‘When I met Anita I could see myself in her. I encouraged her not be embarrassed about her speech and not to be shy in owning her hearing loss. I have been working with and mentoring her to show her that it is OK to make mistakes, that’s part of learning. The most important thing when you are looking for work is to make your employer aware of your disability rather than trying to hide it because that can often backfire.  If you are upfront and an employer takes you on then you are past the first hurdle of proving yourself and you can focus on task at hand.’

It took a year but Anita has overcome her debilitating shyness. ‘I am more talkative and happy. I think I am more intuitive now.’

Open to learning and new experiences

‘It’s been such a pleasure to work with her. Often nervous parents worry about their child being taken advantage of so they can put a lot of barriers in their child’s way because they are being over protective. It’s often hard for them to see that their now adult child has a lot of potential. The truth is people with hearing loss can find satisfying work, buy a house, get married, live life to the max,’ Sharon says.

Sharon says everyone at the Deaf Society was jumping up and down when they heard the news that Anita had won an Adult Learners Week scholarship. ‘We were all so excited. She really does deserve this award.’

Anita says, ‘I was speechless! I feel so grateful.’

She plans to use it to further her Auslan, do hospitality training and get her drivers’ license. With her sights on a career in hospitality or tourism she’d like to learn another language and travel the world.

‘Anita is very ambitious,’ Sharon says. ‘She blows me away, how she is always open to learning as much as she can.’

What advice does Anita have for other young people who may be in the same situation as she was?

‘Believe in yourself and accept all the opportunities to learn that are offered to you.’