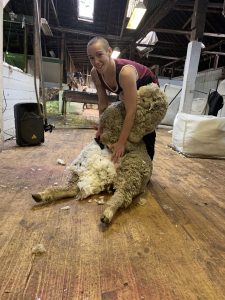 Australia may well have been built on the sheep’s back but getting the wool off the sheep is harder now than it’s ever been.

In 2019 there were 2874 resident shearers in Australia compared to 12,000 in the mid 1980s. The shortage has been exacerbated by drought and the travel restrictions of COVID.

A $1.2 million Victorian government initiative aims to increase the quantity and quality of shearer training across the state.

Glenn Haynes, Executive Officer SCAA Shearer Woolhandler Training Inc., an RTO and Learn Local based in Hamilton, says that until recently there’s been limited course availability and a decline in on the job training, making it difficult for people wanting to enter the industry.

Now SCAA Shearer Woolhandler Training Inc runs introductory and certificate level courses across Victoria linking graduates to employment through their job network and supporting them on the job.

‘We create a pathway for our students into the industry. We give them follow up training in the shed to reach the goal of shearing 100-120 sheep a day,’ Glenn says.

‘My parents probably always thought they’d have to keep looking after me. But they are so proud of me because I have a future now.’ Lauren Stirling, shearer

Twenty-six year old Lauren Stirling is one of more than a hundred students who have completed new accredited shearing qualifications as part of the state government initiative.

After she left school at 16, Lauren had trouble holding down a job. ‘I’ve been a spray painter, a drover, I’ve worked at the races, in a supermarket. I’ve had a lot of jobs but I could never stick anything out. I’d always chuck it in.’

Now she can’t see herself doing anything else. ‘It’s so much fun. I love, love, love it.’

For Lauren on the job experience to help her reach the industry standard was vital. She worked as a woolhandler based out of Ballarat and took every opportunity she could to refine her skills.

‘You have to build up your experience once you’ve done shearing school. So for practise I would jump on a stand at lunch time and shear all the belly wool off the sheep in a pen for the shearers. And then if you were lucky a shearer might give you a nod at the end of the day to come over and shear his last sheep for him. It’s kind of like a thank you from the shearer and an exciting moment when you are new to it to get to shear a whole sheep.’

These days Lauren is a full timer and hasn’t looked back. ‘It’s the best job. You don’t have to worry about what you wear, you can have music roaring, and you’re part of a team and it’s so much fun. I feel really guilty if I have to have a sick day, I really care about it. It really has changed me.’

‘I love work, I love making money, I love to sweat I love to feel I’ve earned my keep, earned my meals, and earned my sleep.’ Lauren Stirling, shearer

The Certificate gave Lauren practical skills in preparing and using her equipment, safe work practises and teamwork. But it was the physical handling of sheep that initially had her worried.

‘I’m 55kg and most of the sheep weigh more than me. But girls make good shearers so the teachers focus on teaching you the right footwork for balance and setting the sheep up correctly which is so important to getting good blows. I learned how to manouevre my feet and weight and by changing things like how low I crouch so the sheep is comfortable and it doesn’t kick or squirm. That way you can shear it as quickly and cleanly as possible.’

Glenn Haynes says shearing students now come from a variety of different backgrounds and range in age from 16 to 60. ‘Eighteen months ago they came from farming backgrounds or they had a friend or a dad who was a shearer but the last 12 months we’ve seen everyone from carpenters, people working in aviation, management and hospitality wanting to work as shearers. A very good work ethic is pretty much all you need. You just have to rock up and be willing to do a great job.’

Glenn says shearing takes mental toughness too. ‘You’re thinking on your feet all the time, having to adapt, for example, to changing breeds. You have to be able to work through heat, dust, flies, prickles. You’ve got to be mentally strong because you could be working somewhere there’s no phone service, the closest town is 100kms away so if something goes wrong you’ve gotta work it out. You have to be prepared to repair all your own equipment so you have to think ahead, take along spare radiator hoses, that sort of thing.’

While there’s plenty of local work Glenn says it’s an ideal job for people who want to travel. ‘They can chuck their gear and their swag in the back of the car and travel all over Victoria, Qld, WA, anywhere. They get to see the best parts of the country, parts most of us would never see.’

A chance to shine

Glenn says often the best shearers are people who struggled at school. ‘Some of the young ones are little ratbags but that’s what you need – the kind of people who have too much energy who need somewhere to use it. They’re the sort who could never sit still at school, who always wanted to be outside. I was like that myself. Then you find they get the bug for shearing and they make big money and away they go. They often go on to be our championship shearers.

One of the best things about shearing is that young people who battled at school, can go on, as long as they’ve got a good work ethic, and can make $500-$600 a day. There’s no other industry where they can do that.’

Course graduate and new shearer Paddy Hansford agrees. He didn’t enjoy school and left at 16. ‘I have a massive work ethic but just not when it came to school.’

Paddy is the son of a shearer but rather than following the traditional path of passing skills on from one generation to another, Paddy’s father encouraged him to do a course instead.

‘My dad said he wouldn’t teach me because he’d just pass on his bad habits. So I did a certificate course and I learned from the best.’

Paddy says the rewards are worth the hard work. ‘I really love the lifestyle. There’s three or more of us in the team and we all get along really well. I love the hard work and the money. That’s what drives me. I want to buy a farm one day. But I won’t be shearing my own sheep, I will hire shearers for that.’

South West TAFE executive manager – education Louise Cameron says it was always going to be a challenge to attract experienced shearers to undertake a training qualification.

‘It’s a very physical job so it attracts people who are very hands on. They are not the kind of people who enjoy paperwork. So getting them to undertake a course like the Certificate in Training and Assessment which is very academic and uses a whole different kind of language meant we had to plan to offer a lot of support.

‘They know their job very well but being able to map industry skills to the training package requires a very different mindset. So this was a big barrier. And people don’t use computers when they’re shearing, so digital skills were an issue. The average age of a shearer is late 40s and they are widely dispersed geographically. So getting them in one place at one time, and engaging them with a fairly academic course was a big ask.’

To overcome these barriers SWTAFE offered scholarships so shearers continued to receive a wage and learning assistance to support them through their training.

Applicants were recruited from across the state and on the basis of their industry skills.

‘We were looking for people who had a good record of achievement, who were respected in the industry who would be good role models for their students. And people who wanted to give something back,’ Louise says.

Of the 10 who were selected, nine completed the training, which ran from February to November 2020. With the disruption of COVID lockdown, training shifted to a virtual classroom. The rest of the time was spent at SWTAFE’s Hamilton campus and local farms.

Louise is ‘ecstatic’ about the results. ‘Graduates said they learned so much and benefitted from being pushed and supported during training.

‘The shearing industry is the backbone of rural Australia. It was great to see such a successful program that offers really strong professionalism to its trainers and new people coming into the industry.’

‘If you’re an electrician or a motor mechanic you can look at a manual and it will give you diagrams and instructions for doing things. But there isn’t a manual for shearing. It’s a practical physical skill. You have to do it to learn it.’ Louise Cameron, South West TAFE executive manager – education

‘It was very challenging at the start because of COVID there was not as much face to face teaching as we’d hoped.’

Workplace visits to observe training in action were limited too. ‘We couldn’t go out to see them on farms or in shearing sheds so we had to observe them teaching via video conferencing.

‘The beauty of the Certificate IV in Training and Assessment is that when it’s group and industry based you can use peers as learners and mentors. So they could deliver theory to each other and get rich feedback on technology and teaching techniques.’

Despite the class being dispersed interstate and on farms in remote and regional areas attendance was ‘fantastic,’ Janiece says. ‘They would log in from all over to attend classes and workshops. Someone even pulled over and logged in from their car on the side of the road with their headphones on using their laptop. They were so committed.’

Janiece said participants were undaunted. ‘Shearers really know how to deal with a challenge and break it down and work through it. I was completely blown away by their ability to adapt to using 21st century digital tools to achieve results.’

For some the scholarship program was lifechanging.

‘I had a student who had had a very good career as a shearer and really wanted to be a teacher but had no digital skills. He’d never sent email, he didn’t know how to use a laptop or a computer. Now he’s out training young ones, using the shearing app with his young trainees and he’s quite comfortable doing things like sending out links to connect with them via Zoom. At the end of course he said, “I never thought I would ever be able to do this in my life. I thought my working life was over.”’

Graduates from the Certificate IV in Training and Assessment are now employed as shearing instructors to deliver accredited training to students in shearing sheds across the state.

‘Now they can go out as accredited trainers and assessors. Their passion is to professionalise the industry — to work from the inside to make it better.’ Janiece says.