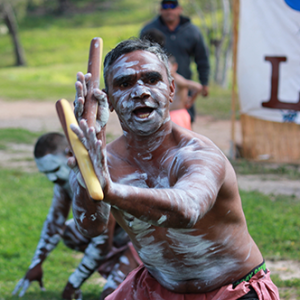 A whole-of-community adult literacy campaign based on a revolutionary Cuban education method is having life-changing results in Indigenous communities in outback NSW.

The first pilot of the Cuban-designed mass literacy education program conducted in Wilcannia in 2012 helped reduce crime and increase school attendance. Now it’s flourishing in Bourke and Enngonia and is about to begin in Brewarrina.

Professor Jack Beetson, Executive Director of the Literacy for Life Foundation, which coordinates the program, says it’s the community’s involvement in the preparation and delivery of the campaign that distinguishes this project from other models and makes it well suited for Indigenous communities.

In the second phase, local Aboriginal people who are employed and trained as tutors run 13 weeks of reading and writing lessons for learners based on a set of DVDs. The final stage is 12 weeks of activities to help people consolidate their literacy skills and take next steps – whether it’s to find work, do further training, be involved in providing services to their community or be more involved with their family.

‘A lot of parents and grandparents are happy to do it so they can help the kids and grandkids with their homework.’

Illiteracy rates amongst Aboriginal Australians are estimated at around 40–50% and even higher in some regional and remote areas. Poor literacy adds to disadvantage, making it more difficult for people to find work, manage their health, be involved with their child’s schooling and participate in the management of their communities.

Classes aim to bring students to a minimum of level one and a maximum of level two as measured by the Australian Core Skills Framework (ACSF).

Jack says literacy is a fundamental human right. ‘One of most basic human rights is the right to learn. To be literate is everybody’s right and it’s the responsibility of the literate person to attend to that.’

Part of that responsibility is getting behind any campaign that will help people to learn to read and write. ‘People feel ashamed of not being able to read and write, so learning from your own is very important. 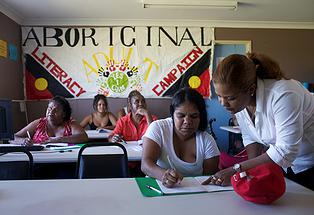 ‘Literacy is one of the most empowering things you can give to people,’ Jack says. ‘It gives Aboriginal people the ability to take control of their lives as individuals, families and communities.’ It’s a critical part of breaking down inequality and building a society in which everyone can participate.

Literacy for Life began in Bourke in September 2013 and by the end of last year 81 people graduated and the campaign had an 80% completion rate.

Jack says the campaign has had an impact on the crime rate. ‘There’s been a significant reduction in the number of Aboriginal people engaged with the criminal justice system. Just months before the campaign began Bourke was described in the papers as the most dangerous town on earth. Now the Local Area Police Commander wants us to stay at least another five years.’

Eights per cent of Aboriginal people in court in Bourke are there for traffic offences, usually for driving without a licence. ‘If you can’t read you can’t get a driver’s licence.

‘Low literacy affects everyone in the community. It affects the economy, the health system, the legal system.
People with low literacy are far more likely to need and access a whole range of other services.’

You also can’t do the training to get an OH&S white card to work in building, mining or construction. Learning to read bridges the gap between unemployment and employment. With a driving licence and white card you’ve got more work opportunities, better quality of life and you’re less likely to end up in court.

‘Everybody in Bourke is raving about the campaign, from the shopkeepers to bankers to tradespeople as well as the Aboriginal community. Everyone notices the change it’s made to the town.’

The results at Enngonia, where the campaign began in March 2014, tell a similar story, with parents as well as kids more engaged with school. ‘The principal of the Enngonia local school says it’s been life-changing for her because parents are now asking about their childrens’ report cards, they’re reading to their kids at home. She’s seen a big improvement in the children’s reading as a result. The parents are communicating much more with the school, and coming along to help and take part in school events, all of which they’ve never done before.’

Involving the community is critical

The involvement of the community has been critical in the success of the project, Jack says. ‘The community is trained so that once we step back they can run it on their own. That defines the difference between honourable and dishonourable programs. This model promotes independence, where the Aboriginal community takes ownership and runs it. The alternative model is relying on external trainers who don’t live in the community who have a ‘fly in, fly out’ approach, which promotes dependency.’

‘Our approach does wonders for the whole community and encourages other people to get involved.’

The local Aboriginal people employed as teachers may be in paid work for the first time in their lives and they love the work because they can see the impact of it every day.

‘The economic consequences are enormous. The jury’s been in for 50 years on the link between literacy and better health. Once people become literate, their health improves. For example, they’re more likely to benefit from medications because they can read the dosage instructions.

‘I think it’s one of the most extraordinary and rewarding things I’ve been involved in in my life. I play a very hands-on role in community engagement. I bring together the Aboriginal and non-Aboriginal people in town. It’s a peace building role in some ways. No one can disagree that learning to read and write is a good thing so it’s a matter of finding ways of working together.’

You just have to attend one of the graduation ceremonies to get a sense of how important literacy is to people, Jack says.

‘When graduates read their story out at this very public event there isn’t a dry eye in the house.’

The Literacy for Life Foundation was formed in 2013 and is a partnership between national health research body The Lowitja Institute, the University of New England, and construction company Brookfield Multiplex.