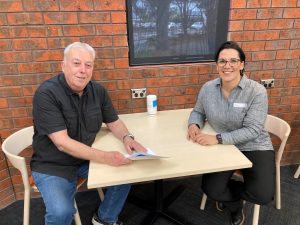 Jeff McNamara, volunteer adult literacy tutor, was thrown in the deep end the first time he worked with an adult student eighteen years ago.

‘It was literally my final day of tutor training and I had just finished my course and the co-ordinator came over and said “I know this is pretty sudden but we’ve got a student outside who needs help with their English.” I was petrified.’

Whenever Jeff is mentoring new tutors he remembers how he felt that first time.

Jeff says developing confidence in his abilities and embracing opportunities to learn has been crucial in his experience as an adult literacy tutor.

He is one of around 25 volunteers who work across five libraries in Tasmania’s central north west.

Jeff, 67, says growing up in Sydney’s Blacktown was good preparation for his tutoring work.

‘We were surrounded by chook farms, pig farms, and market gardens run by Maltese and Italians so from my early childhood I was mixing with people who had difficulty with English. Lots of the fathers of kids I knew who went into manual jobs like labouring, trades and factory work had trouble with reading and writing.’

Many of Jeff’s contemporaries didn’t finish Year 12 but he enjoyed school. His transition to higher education was a case of good luck. The abolition of conscription meant he avoided the draft and the Whitlam Government’s introduction of free tertiary education meant he could afford to go to university.

‘I’m a lucky man and I think you should share that luck around. A lot of people I tutor are not in the position they’re in by choice so I feel it’s a social obligation that if I’ve been given opportunities in life my role is to give something back.’ Jeff McNamara

Jeff tutors in both adult literacy and migrant English and says adapting to the needs of each person he works with is crucial. He’s currently working with a young man who left school early then worked as a farm hand before health issues meant he had to give up manual work.

‘I’ve been working with him to improve his reading fluency and showing him how to use the internet, develop computer skills and do project planning so he can work in farm management because it will be that kind of work he does in future.

‘He’s naturally intelligent and a great problem solver but he hasn’t learned how to learn. So, faced with something he doesn’t know, he sometimes is unsure what to do next. I’ve been working with him on those skills — asking questions, doing research, gathering information and putting it all together like a jigsaw puzzle.

‘People are often so embarrassed and ashamed about their reading or writing or spelling. Their selfesteem is poor because they’ve been told all their life that they’re dumb or stupid and they come to believe it. But many develop an excellent memory to compensate. I think that when you can’t read you recruit other parts of your brain to help you out. You can’t rely on writing things down or using the internet so you have to rely on your memory.

‘The advantage of growing up in Blacktown is that I can tell people my back story, and use examples of people I’ve known to make the learners feel more comfortable. I use earthy language sometimes to put people at ease because there’s sometimes that barrier that people think I’m some sort of toff. So I tell them about where I grew up and the kinds of friends I’ve had and they think, “He gets it”.

‘One guy I worked with had been in prison and wanted to get a job and was very motivated because he was scared of going back inside. So I told him about my background and he bounded ahead. He got his licence and a job and he gave me a card saying “Thank you for changing my life.”’

Helping people to be less self-critical is important Jeff says. A man who worked as a truckie came for help so he could read to his children. ‘When I asked him to read to me, he was faltering, self-conscious and he was listening to himself, judging. So I got him to sit in his truck every lunchtime and read out loud. I said “No one will know what you’re doing”.

‘It wasn’t a strategy we’d been taught in tutor training but I wanted him to develop his fluency through practice. He did it for a month and then he came in one day and he read three pages to me without faltering. Now when his three year old asks him to read a book they do it together.

‘If people are not literate they feel alienated from society. Once a 19 year old came along and you could tell he felt worthless, and he was pretty socially awkward, not much eye contact, that sort of thing. He could read to a point but he wanted to read better. And he did, he got the confidence and was soon reading his PlayStation instructions without a problem.

‘I hadn’t seen him for a while then one day I ran into him in town and it took me a second to recognise him. He had his shoulders back, he was smiling at me, and walked with a bit of a swagger. He realised he was not stupid and got himself a temporary job. Once people develop that self-confidence they feel less like outsiders, less isolated.’

The sessions are invaluable, Jeff says. ‘The support I get has been outstanding. Kerrie gives us the best training. In our volunteer training group, we share what worked for us. It’s a constant process of learning from each other. You think “I can use that”. It’s fantastic.’

Some volunteers specialise in particular areas such as numeracy, English as a second language, or developing literacy for getting a learner’s permit. Kerrie pairs volunteers with learners according to need.

‘I tend to match Jeff with younger men who lack good role models or people in their lives they can turn to for advice. Jeff is just the man for it. He is such an easy person to have around and I’m so delighted to have someone like Jeff as a volunteer. We are so, so lucky.

‘My volunteers are so engaged and want to learn and share their experiences which makes my job a dream.

They are so generous with their time and are very open to being lifelong learners themselves. I enjoy sitting and listening to them sharing their experiences. I learn so much from them.’

‘What’s the hardest thing about tutoring? I don’t find it hard. It’s invigorating and rewarding. I love it.’ Jeff McNamara