Digital at the depot 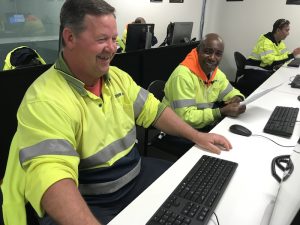 When a council decides to go paperless there are some workers who will find the switch to electronic
documents easier than others.

For office workers using computers as part of their daily work, the transition is straightforward. Others less experienced with technology can find giving up paper-based manual systems is a struggle.

When the City of Sydney decided to go move from paperbased HR systems to electronic, many of its outdoor workers needed help to develop digital skills they had never needed before. Since 2014, the City has been running ‘Digital Literacy for Outdoor Workers’ training in conjunction with TAFE NSW.

Glen Freeney is one of over 300 staff employed by the City of Sydney to provide 24/7 cleansing and waste services to keep litter bins empty, streets clean and garbage collected.
‘I’m 65 so computers are not in my blood, not like younger people in their 20s and 30s who are brought up with them,’ Glen says.

Before he did the digital literacy course Glen used his home computer for fun and entertainment.‘I used it for things like eBay and YouTube and email but that was about it. I’d never used it for business so I had a lot I wanted to learn.’ With the move away from paper-based systems at work, Glen wasn’t confident lodging timesheets and leave forms online. ‘I wasn’t sure what I was doing. It was a pain in the neck asking people at morning tea to help you because they’re missing out on their break to give you a hand. A lot of the paperwork that used to be done by team leaders is now done by workers so you have to step up and learn how to do it.’

NSW TAFE Literacy/Numeracy teacher Jill Finch, who runs the 12 week course, says modern workplaces are demanding
higher levels of literacy and digital literacy than they have in the past.

‘There’s a cohort of employees who started work several decades ago when digital literacy was not a big requirement in the jobs they did. It’s a big issue at the moment for employers who have workers who have never used computers. Sydney Council is very modern and forward looking. It has big plans to be progressive and green and sustainable so everyone working for Council has to be able to navigate and use complex corporate systems. The digital literacy required is different from the personal and informal communication of using Hotmail on your phone.’

The 12-week course runs for 2 hours a week. Typical students are men aged between 45 and 70, mostly shift workers from the cleaning and waste areas, many of whom left school at the minimum age, which for some of the older ones was 12 or 13. While most of them have mobile phones, most don’t have smartphones and use their phone for calls and texts.

‘These are practical blokes who leave me for dead when it comes to fixing cars and driving boats. They are skilled at using all kinds of technology but this is more difficult for them because it’s using unfamiliar technology in a context that is new to them.’ Jill Finch, Literacy teacher, NSW TAFE 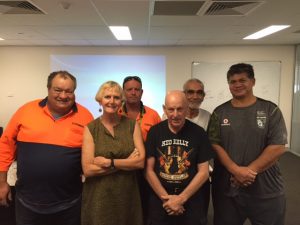 After an initial quiz to establish how much they already know, Jill takes the group through keyboard and mouse familiarisation, using Word and Outlook to compose and send emails, then logging on to and navigating around the City of Sydney’s intranet.

By the end of the course, they can scan a doctor’s certificate, attach it to an email and upload it into the system. They also learn how to register for and use MyGov and develop critical skills in assessing information from Google search results. And there’s plenty of time to practise.

‘These classes have been very popular,’ Jill says. ‘Apart from the practical skills they learn, people’s attitudes about themselves changes. They are much more positive. It’s common for people to say things like, ‘’I was a real dummy when I started, but now I can do this or that and I understand it more too.”

Jill says being able to understand and use the system is very empowering. ‘In the past if they wanted to act in the team leader’s job while the team leader was on holidays, indicating their interest was a matter of sticking your head round the boss’s door and saying “I wouldn’t mind having a go”. But now they have to apply through the Council’s intranet. Previously they wouldn’t have had a clue how to find the tab for internal job vacancies; wouldn’t have
been able to navigate through the drop-down menus, all those things. So doing a course like this empowers them to find more opportunities, to learn about what training is on offer; to know more about their rights at work and their leave guidelines.’

Glen says, ‘I’m much more confident now. It’s really helped at work. For example, I’ve been asked to go to other depots so I just go on Google Maps and then I know exactly where I’m going and how to get there. You don’t have to get on the two-way and make an idiot of yourself.’

‘It’s a great course and I’d recommend it to others. Jill’s knowledge of computers was really good. But she was very good at dealing with us when we got frustrated. She really encouraged us to keep going.’

‘The whole course was an eye opener. I’ve learned as much as I need to use the computer at work. But I would love to learn more. It’s fascinating to see how we can use computers. It’s a whole new world,’ Glen Freeney 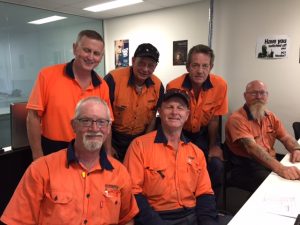 The City of Sydney TAFE NSW program was funded through the federal government’s Workplace English Language and Literacy (WELL) Program, which has since been discontinued. The new Foundation Skills for Your Future program offers scope for workplace training in literacy and numeracy.