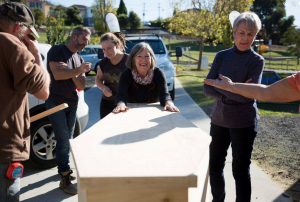 Jill Warwick, 73, signed up for a coffin making class because she’s always up for an adventure. It also made financial sense.

‘I had been very involved in organising a friend’s funeral and I was horrified at the price of her coffin. The minimum for a coffin for cremation was four and a half to five thousand dollars.’

Jill persuaded three of her friends to join her. By the end of the six week class at West Moonah Community Shed, each of them had designed and built their own custom made caskets.

Jill says the class was not all doom and gloom and offered an emotional outlet. ‘It wasn’t the least bit depressing, it was fun and we laughed ourselves sick.’

Jill involved her four children and their families in the design, each of them choosing a colour for its brightly striped exterior.

‘I sent paint charts out to family in the US and Adelaide and everyone chose a colour. I painted the lid of the coffin yellow because I believe that’s the international colour of peace. Then we divided it up into 21 different colours and all the kids who were here came to the house and we did it together. They thought it was a scream. They’d say to friends “No, I can’t go out to lunch today, I’m helping to paint mum’s coffin.”‘

Jill believes that making a coffin together helps with the mourning and grieving process.

‘My family and I drank many glasses of wine and had many laughs while we painted it. One of the best things about doing it was that it forced us to be honest about how we all felt.

‘Burying someone you love in a coffin that is handmade and beautiful becomes part of how they remember you. For my kids the memories of decorating it with me will be equally important. They will all laugh about it and remember the day the coffin fell off the stand.’

Jill found the class empowering in other ways. ‘It became political for me. The more I learned about the funeral industry the more I thought, Why should we be intimidated? Why should we feel we have to buy a coffin from a funeral director? I discovered that you don’t need a hearse, you can pick a coffin up in a ute as long as it’s covered. But how many people know that?’

Joining the class was also a great way of expanding her social life Jill says. ‘We were nervous about meeting new people when we started. At my age you tend to mix with your old friends so when you go to something like this there are all these new people to meet from completely different walks of life. It’s a great way to make new friends.’

‘Learning to make a coffin is also an emotional process. The coffin is made to be used for the saddest time of the family’s life but mine was made with laughter which helps to lessen the grief.’ Jill Warwick, participant

From cabinets to coffins

Inspired by a similar project in Ulverstone, the West Moonah Community House in Hobart set up a Coffin Club in 2017. Soon afterwards the founder of the project left, and Peter Marshall, who was already a volunteer at the Shed, took over.

At first Peter was reluctant. He is a cabinetmaker by trade but he felt unprepared to teach the class. ‘I’ve had plenty of experience measuring and building boxes but I’d never made a coffin before.’

He visited a couple of local funeral parlours for advice on what was required, he practised by making a prototype and was fortunate to find a local with just the right expertise and time to help him.

‘I was lucky that Scott Turnbull, who has over 30 years experience in the funeral industry, volunteered. He’s been invaluable.’

Classes are kept small and Peter takes each person through the process of design and construction adapting to the needs of the individuals in each group.

‘Some people are very capable and just need a bit of direction but there are others who can’t drill a straight hole so you are teaching them the very basic skills.’

At the end of the course, each participant leaves with a good practical knowledge of woodworking tools and how to use them safely and their own personalised casket made to industry standards.

The Coffin Club runs for three hours a week for six weeks. And places fill fast. Participants range in age from 30 to 85 years old. And a lot are women.

Not all doom and gloom

While it might sound morbid, Peter says classes are anything but. ‘People get a sense of achievement from doing it, they feel happy to have done it.’

People sign up for the course for a range of reasons. ‘Some are upset at the cost that funeral industry charges which can be up to $10,000 for a coffin. Others want to learn how to use tools and walking out with a coffin is a bonus.’

And some come along with a sense of urgency, having had news that time is running short.

Of the 42 coffins produced since the club began, two have been used. Peter built one for a close friend who died unexpectedly. ‘He was a mate I’ve known for 50 years so it was an honour to make his coffin.’

A chance for creativity

Each coffin is based on a pattern that is adapted for the size of the person who will be using it. But apart from the basic blueprint, the rest is a matter of personal taste. Some people go for plain and simple. Others like the idea of personalising their coffin like the Bunnings worker who made his coffin out of Bunnings pallets.

Some store their coffin away under the house or in their shed until they’re needed. Those who are fit and healthy make practical use of them in the meantime. ‘We’ve had 5 or 6 who’ve turned them into shelving for record collections or books or displays of animal skulls. One guy painted his shiny black with 100mm legs and on Friday nights he has the boys round and uses it as a bar top or a coffee table.’

Peter says it also fosters curiosity about end of life issues. ‘In the process of making the coffin other subjects come up. I’ve organised monthly talks on things like care packages and palliative care because people are interested in learning more. I’ve also worked with “You and Taboos” which offers alternative burials. One bloke wanted a bushland burial, a natural alternative to a grave. So we had to build a coffin that was environmentally friendly, that didn’t use screws or pine and had rope handles.’

The course is task focussed and talk of death tends to be matter of fact. That doesn’t mean people aren’t feeling distressed, particularly if they are making a coffin for a loved one. ‘I haven’t had anyone break down, but they often tear up. Some come back and show me pictures of the funeral.’

Funeral costs can be expensive and making a coffin relieves some of the financial pressures on families left behind.

Jill says, ‘What I liked so much about the Coffin Club was that it opens up the subject of death and dying which many people in their older years want to avoid talking about. It was such an important thing to do and such a great talking point. One lady in our group was so quiet and subdued and didn’t join in but by the end she was as bad as the rest of us! We’ve got photos of us doing things that you would expect teenagers to do, like lying in our partly built coffins. It was fun and it saved us money and it educated us. I think it takes away the fear. I don’t want to die but now I don’t have that fear.’

‘It’s a comfort to know that the coffin is downstairs and the kids don’t need to worry. I bought a beautiful old Indian sari and I have left instructions that my family use it as a shroud. They know what I want, they just have to take the sari and tuck me in.’ Jill Warwick, participant