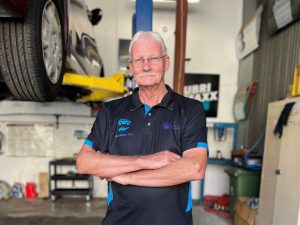 The hand brake turn is a tricky manoeuvre where the driver pulls on the handbrake to navigate tight corners or turn a car around fast. It is an apt name for a life-changing automotive skills program in Melbourne that gives young people who are on the wrong path the opportunity to re-set their bearings.

Run by Concern Australia, the 5-week program aims to help disengaged young people navigate their way to education and employment pathways while also learning about themselves.

Hand Brake Turn (HBT) is offered at Concern Australia’s training centres in Sunshine West and Dandenong, which both have well-equipped auto workshops.

Once they achieve their Certificate of Attainment HBT graduates can develop their skills further with a 3-month paid contract in the associated fiXit social enterprise working on cars alongside experienced auto industry professionals.

Under the guidance of their mentors, the graduates repair and service donated cars that are then sold
in need. They also service cars and carry out minor repairs for staff and the general public.

Trainer Phil Bloy has been involved with HBT since it started 27 years ago. ‘I had a heavy machinery smash repair business and I used to mentor students in the early days of the HBT program,’ says Phil.

‘Then I decided to sell my business and retire on a yacht. My wife and I were sailing around south-east Tasmania when I got a call from HBT asking me if I’d like to come in and have a chat about the program so I put the sailing trip on hold. That was 11 years ago.

‘I love working with the young people and I believe everyone deserves a second chance. And maybe a third or fourth chance!

‘Some of our students just aren’t suited to classroom learning and are in danger of dropping out and drifting. Some have been “let go” by their schools, and that’s pretty devastating for them because it’s a vote of no-confidence – someone’s given up on them. Others have come in from the youth justice system,’ says Phil.

Regardless of how they get to HBT, Phil says first and foremost he has to gain the trust of each participant and let them know he’s there for them.

As part of his own lifelong learning, Phil completed a short course on emotional intelligence, which taught him a lot about the issues he now deals with in the HBT program.

‘It was a really useful course and I apply a lot of what I learned. It’s helped me build bridges with the young people I teach.

‘Once you develop trust, they understand that when they join the program, they become part of the HBT family and they can count on us to be there for them. We have an open-door policy so that even after they have completed HBT, they can return for help with resumes, job-seeking or just for a chat.

‘It’s so rewarding when someone drops in years later and they have their own car, a job and maybe a family,’ says Phil.

‘One of our older graduates has built up a successful business and recently employed one of the newer graduates – that was pretty special.

‘Another young bloke we had through said he’d been one of Melbourne’s top car thieves for a long time, but he realised it wasn’t the life he wanted to lead.

‘He did well in HBT and became a mechanic, so now he fixes cars instead of stealing them!’

At HBT participants spend at least 85% of their time in the automotive servicing workshop at the training centre.

‘Some of the participants haven’t had much schooling so reading and writing can be a problem. Adapting the materials to suit the learners gets good results. For example, I use a lot of picture-oriented problems and ask them to circle the right answer. This way they build their essential knowledge and their confidence at the same time,’ Phil says

‘Instead of anxiety and fear of failure, you get success breeding success. They also keep a daily journal which we help them write up each afternoon. Even if they haven’t done much writing before, they can write at least half a page a day by the time they leave.

‘It takes a bit of patience and resilience on both sides, but I take pride in the fact that when they complete the HBT program they have developed a good set of skills for future employment – and for life in general,’ Phil says.

Connor’s story
‘I’ve always been interested in cars and understanding how they work, but I didn’t like pen and paper learning. I couldn’t see the point of sitting in a classroom studying subjects that have no relevance in my life,’ Connor Challenger, a HBT graduate says.

‘I didn’t want to go on at school, but I knew I wouldn’t be able to just leave and get a job working on cars.

‘I loved HBT,’ said Connor. ‘It’s really practical and the staff are all very family oriented.

‘The classes are small so it feels like I’m working with friends who really know me and care. They relate to us differently than the teachers at school who deal with hundreds of students each day.

‘We still do some pen and paper learning, of course, but it’s relevant to the hands-on learning.’

After completing his HBT program, Connor began work on a fiXit contract two days a week.

‘It’s great because fiXit gives you heaps of practical experience and a realistic taste of employment in the automotive industry,’ he said.

‘When I complete my fiXit contract I’ll go back and finish school. Then I’ll do a Certificate II in Automotive Servicing.

‘The HBT and fiXit programs have been great experiences for me and I’d recommend them to anyone who’s interested in the automotive industry and finds that school isn’t right for them.’