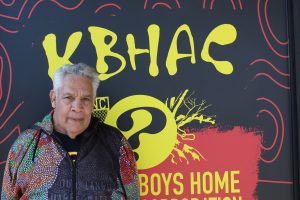 A NSW literacy program is helping members of the Stolen Generation like Uncle Bobby Young (pictured) to reclaim an education cut short by institutionalisation.

In 1964 seven year old Willy Nixon was taken from his family to the now notorious Kinchela Boys Home on the NSW north coast. He was one of around 600 young boys forcibly removed from his family and incarcerated at Kinchela, which was run by the NSW Government from 1924 to 1970.

Once they entered the home the boys were dehumanised, stripped of their identity, beaten and abused. And things were no better inside the classroom.

‘We didn’t get much learning at Kinchela Boys Home because you were too afraid to do things in case you got them wrong. If you didn’t spell a word right, you’d be flogged. Education was forced on you and you were too scared to learn,’ Uncle Willy says.

Uncle Willy is a member of Redfern’s Kinchela Boys Home Aboriginal Corporation (KBHAC) — which was established for survivors of the ‘home’ — and is one of a group of Uncles taking part in a literacy program to reconnect them with formal education and recover culture and connection.

Uncle Willy attended the Kinchela Boy’s Home from 1964 to 1969. He says that his time there scarred him for life.

‘At the home they drummed it into you that they were taking the black out of you. They took away our language and culture. Now I can’t pass it down to the younger generation. I can’t take my grandchildren out in the bush and show them all about bush food. That was the worst part of it. That little boy should have learned from his parents instead of some bloke with a big stick in his hand who bashed all that culture out of us boys.’

After moving to Sydney, Uncle Willy got his first job at 13. But his poor schooling had left its mark. When a relative gave him a wristwatch Willy didn’t know how to use it. ‘He had to teach me how to tell the time. You never had that kind of learning, the kind of stuff you need to grow up in this world.

‘Kinchela made us really hard. It was a terrible life. When I got out and got to the streets of Sydney I put my punishment on poor innocent people. I was locked up in Long Bay when I was 16. It was a real rough jail. There was no help for you.’

Uncle Willy worked in manual and factory jobs for 40 years until his retirement in 2017. His reading and writing were enough to get by at work but the introduction of computers made work difficult.

‘If I had to write things out like consignment notes I was all right but when computers came in you had to punch in codes on the computers. It made it really hard.’

The Kinchela Boys Home Aboriginal Corporation in Sydney’s Redfern was established by the survivors of Kinchela to connect and support them, their families and descendants, who suffer ongoing pain and trauma from their institutionalisation and treatment.

Uncle Bobby Young attended the Kinchela Boy’s Home from 1954 to 1965. Like Uncle Willy he says that his time in the Home was traumatic, and that he never really received a formal education.

‘Our identity and culture were taken away from us and we were called by numbers. I was number 24 and my cousin was number 23,’ Uncle Bobby says.

‘We were punished regularly at the home, caned and forced to write a word 100 times from the blackboard even though our hands and bodies were aching from the cane. When I left, I still had very little education, so I went to work in the railways and then later as a driver for a freight company.’

The NSW TAFE literacy program aims to help with a process of healing.

Staff at TAFE NSW and the Uncles from Kinchela worked together to build trust and develop a literacy program to meet the individual and collective goals of the group.

A strong component of the program has been integrating literacy activities with cultural and family history research to support the Uncles’ truth telling that helps to address the trauma of their forced removal from family, community, country and culture.

Jill Finch says building trust has been crucial to the program’s success. ‘It was all about spending time getting to know each other and listening so that we could work in partnership. That was a really important starting point.

‘Tailoring the program to suit individual needs means each Uncle is in charge of his own learning whether it’s a desire to be able pay his own bills, get a driver’s licence or conduct family history research.’

TAFE NSW Aboriginal Education and Engagement Coordinator and proud Ngemba woman, Bobbie- Sue Wright says the program has been successful at engaging the Uncles and helping them to change their perception of education.

‘We knew that these Uncles had unfortunately had negative experiences with early schooling. So bearing their experiences in mind it was so important to show empathy and understanding and build rapport and a respectful environment. We had to work to break down that barrier and encourage them to engage with education again,’ Bobbie-Sue says.

‘This program has built strong relationships and helped to bridge the gap between a westernised education and our community. This shows in the weekly attendance. At first, the numbers were low and Uncles and descendants were reluctant to come into the room. But we’ve been consistent, showing up every week regardless and now the Uncles turn up early, ready to begin their learning and are happy to be there.’

One of Uncle Willy’s goals was to participate more actively in the Foundation’s public education program. The Uncles take a mobile education unit on the road and share their stories and the impact their experiences have had on them. But he was reluctant at first.

‘Before I was really, really shy and I didn’t know how to express myself. But the other fellas said, “Come out, you’ll enjoy it”. I went along where they do these talks to students and government officials but I didn’t say anything.’

Uncle Willy says he is now more confident in expressing himself.

‘It was hard at first to do it and not start crying. Now it’s really good I can handle that sort of stuff. If a person can listen to your story, they can pass it on and it echoes and lets people know there are still Stolen Generation people out there. I cleansed myself by telling my story and expressing myself and it helps the healing.’

Doing the literacy program in a familiar environment with familiar faces was important.

‘It was good to do it with the other brothers at the KBHAC offices. I could have done other TAFE classes over the years but I couldn’t feel comfortable about going into classrooms and going to school with people who were different to me. But when you’re around people who are the same as you, you feel good with it.’ Uncle Willy said.

Uncle Bobby says the program has completely changed his experience of education and increased his confidence in reading, writing, and spelling.

‘In the past to get by I’ve mainly focussed on what people were saying at work and around me. I used to get frustrated because my wife and eldest boy would have to help me fill out forms and I’d like to be able to do that sort of thing by myself.

‘I’m really proud of what we have achieved here. I have learnt a lot and increased my ability in reading and writing and spelling, which has helped with my confidence. I really look forward to it each week and I’m so happy already with how far I’ve come.’

Jill Finch says the learning has gone both ways. And it’s made her a better teacher.

‘I learn so much every week. I have relearned that adult education principles are key. They are largely forgotten in the modern world of VET. Putting the learners at the centre and making sure their experiences are valued is absolutely crucial. If I didn’t know it before I certainly know it now.

‘It’s also deepened my knowledge of First Nations people’s lived experience of colonisation and oppression. I considered myself reasonably well informed but looking back what I knew was just a drop in the ocean compared to what I know after hearing what they went through.

‘Thirdly, a team-teaching situation with the three of us working together is incredibly rich and rewarding. On one hand it adds to chaos and challenge because we are always liaising and flying by the seat of our pants, at the same time we’re supporting, questioning and learning from each other. It’s such a pleasure.’

‘It’s so much more than a literacy course. It’s created outcomes that ripple out into communities The uncles are positive role models in our community and education will be seen in a different light.’ Bobbie- Sue Wright, Aboriginal Education and Engagement Coordinator