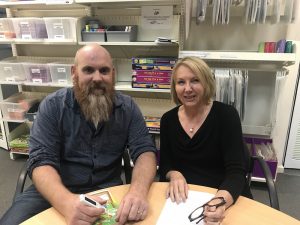 Since it started 40 years ago Read Write Now volunteers have assisted around 35,000 adult West Australians who have struggled with literacy.

On Thursday evenings after a 10-hour day at work, 34 year old boilermaker Samuel Timney doesn’t knock off and go home to his wife and three children. Instead he travels into the city to the meet his tutor Philippa Clark for their Read Write Now session. They’ve been meeting each week for almost a year.

When he saw the ad on TV with a phone number for help with reading and writing, Samuel realised it was time to make the call. He’d noticed how the job market was changing and its demands for higher levels of literacy put him at risk of unemployment.

‘I was finding it harder to get work. I was dealing with agencies and there was always 50 health and safety forms to fill out before you could swing a hammer.’

But becoming a dad was the clincher. ‘The biggest thing was having kids. I couldn’t read to the kids. I could read Spot because I could pretty much guess the story from the pictures. Also since having kids I realised I couldn’t just let it slide. I couldn’t just sit back and let life cruise by. Knowing I’m a provider now too I realised I had to push myself. In the past I’ve had a “she’ll be right” attitude but I’ve always wanted more. I’d love to be an engineer or a marine architect. I want to do more with my life.’

That doesn’t mean taking the first steps towards getting help was easy. ‘When I met Philippa I had kind of already given up because I’ve tried doing something about my reading and failed so many times before. So I was fighting myself to go again.’

‘Philippa sets me homework goals and if I don’t meet them I feel guilty and I feel like I’m letting her down. Philippa puts in so much energy, she gives her time, she drives into the city and pays for parking and I feel I can’t give up because I have to honour that.’

His bad experiences of school didn’t help. ‘I grew up in rural New Zealand and I struggled at school. They didn’t seem to know about dyslexia back then. I was put in a class with kids who were deaf or who had learning difficulties. I had a couple of teachers who tried to help but it didn’t make much difference. In my last year at school, I had a graphic design teacher who really helped and I ended up doing stuff that was 2 and 3 years above my level, because I can think in 3 dimensional pictures it was quite easy for me. But when it came to the test my teacher organised a reader and writer to help me but when I got the exam there was no one there to help me and the test supervisors seemed to think I was being lazy or stupid.

‘I left school when I turned 15 and worked in boat yards. I was glad to get out of school but at the same time I didn’t know how I was going to function or survive in the world.’

Being upfront about his problem with reading and writing hasn’t guaranteed Samuel any assistance either. ‘One time I was offered the opportunity to go up north for BHP. I had to go to health and safety training and I got my supervisor to ring ahead and let them know I would need help. But when I got there I was handed a five hour lesson plan and was told that no one would help. I’m upfront, I communicate and let people know what I need but they still can be dicks about it. I get angry about it at times. 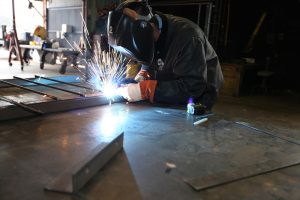 ‘People often assume you’re stupid if you can’t read or you’re lazy or there’s something wrong with you. Some people give me a bit of attitude for example if I go to the physio and ask for help they act like “why should I help you with the form?”. A lot of people have been good about it too, but generally it’s really difficult. I still feel ashamed and it can be quite embarrassing sometimes.

He’s conscious of how his problems with literacy have shaped his life. ‘It’s really limited me. You don’t look for opportunities. You stay away even from small things, you just don’t bother. Your world shrinks as you get older, it gets smaller and you get more stuck.

‘If you’re a dreamer like me it’s soul destroying to have a dream that you never see yourself achieving. Then again, it seems a bit more possible than it did a couple of years ago.’

Samuel’s put in extra effort in his current job to overcome his disadvantage. ‘The place where I work now I’ve worked really hard and I’ve been made leading hand. I’ve got high standards, which is why I got offered a leading hand role because I take a lot of pride in what I do. I can’t afford to slack off and I have to work much harder to overcome my disadvantage. I’m looking into new technology at the moment to help me along, tools like a special pen that reads text to help me spell what I want to write down on the timesheet.

‘For me as an adult and dad, it’s a fear thing. If I don’t do something about it now how will I manage in the future? Fifty years ago you could get a trade and not need reading and you’d be fine. That’s how I started out and it never was an issue. But now I see you get funnelled into a spot that’s hard to get out of. I can always find a job welding for $25 an hour but to get out of that you have to fight your way out. Some of the guys who have half the drive that I have do a lot better.

‘Philippa is helping me to attack reading from a different angle. I’ve always tried to rote learn but she’s getting me into phonics and understanding different rules and she uses material written for adults so I’m not sitting there trying to read stuff written for kids – so that’s good.

‘I see some hope in using new technology. I went to see a lady who will teach me how to use an iPad, so I can push a button and it will bring up what I want to watch on YouTube so I can watch things like Pink Floyd. That’s quite freeing, being able to find and watch things you really like. Hope brings joy and then I feel life’s not so bad.

But it’s a struggle not to feel disheartened. ‘Sometimes I feel down about it too. I think one option would be for me to go back to New Zealand to live and do a job in the bush and never have to face reading again in my life. Or I can stay in Perth and fight a bit harder.

‘Sometimes I feel like I’m not improving fast enough and it’s hard work. Giving up feels easy sometimes. I’ll learn a new word and then a week later I’ve forgotten it. It’s like I’m trying to retrain my brain. I do a 10 hour work day then travel into the city to meet Philippa for another two hours and I’m really tired by the end of our session. It’s so tempting to just watch TV.

‘But one of the things I’ve found out from working with Philippa is that I’m very hard on myself. I’d love to do marine architecture but it’s a massive goal, a four year degree so I have to take small steps.’

Philippa Clark has been a Read Write Now (RWN) tutor for almost 3 years. She’s worked as a primary school teacher and later trained at Dyslexia SPELD in working with children with dyslexia and other literacy learning difficulties.

‘I saw 8–10 students a week after school hours. They were aged over 7, mainly boys. It was very rewarding but at that age they would much rather be out kicking a footy instead of inside working on their reading. It took a lot of energy and creativity. The thought of working with adults who were self motivated and who needed a leg up really appealed to me. A friend suggested Read Write Now and I’ve been really pleased with it.

‘The tutor training was very hands on and practical, with lots of role-playing and an emphasis on how every student is different. After the training, I found the RWN team very supportive. They always have time for me and are happy to sit and talk over problems and suggest ideas. I feel very valued.’

‘While the theory of dyslexia is very similar the way of working with adults is obviously very different. I use a multisensory approach. So for teaching the alphabet, for example, I use plastic letters, games to reinforce sounds and memory and I use cards, pictures and colours. I sometimes use ball throwing to associate and connect a concept through rhythm and play with a tactile object.

‘Understanding your student is the most important thing, and seeing what works best for them. My basic pattern is to teach, back it up, reinforce it and apply it.

‘I meet with Samuel once a week for up to two hours. By the end of a long day he’s tired and it’s hard to concentrate. I always allow time for us to settle in, have a chat and relax.

‘Like a lot of people with reading problems Samuel was tired of pretending. It’s so common for people to feel ashamed, and it is exhausting thinking up strategies for how to cope and how to hide it.

‘He’s very positive and determined. When I met him his attitude was “Right I’m going to do something about this.” He’s very open with his boss and good at communicating his needs. He tells his boss “Please don’t give me forms to fill in or if you do give me more time to get them done”. Because he’s very confident he expresses his difficulties well. He’s very intelligent and very good at maths. 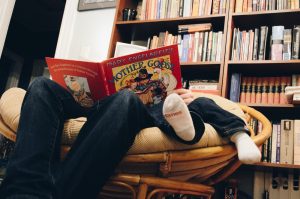 ‘It’s very rewarding to work with someone like Samuel. I really admire his resilience, and his determination to learn. When you understand how difficult life is for someone who has trouble reading and writing and how they’ve coped, it’s very humbling.

‘But I know he gets frustrated because he wants to move fast. I try to set him up for success by setting him small goals. It’s easy for people to think “This is so hard and I don’t seem to be getting anywhere” so you’ve got to reel them back in and say “Hang on, look what you just did!” You have to help people notice the progress they’re making.

‘Samuel’s made big gains. Before he couldn’t recite the complete alphabet and couldn’t recognise some sounds and didn’t know what order letters came in. He didn’t know the order of the months of the year, so he wasn’t sure of his children’s birthdays. Now he’s reading more fluently, he’s recognising syllables, breaking words down into small chunks instead of just guessing them. I’ve seen really significant improvements in his reading.’

‘It’s very humbling. I think I learn as much from my adult students as they do from me.’