Four days a week the large kitchen at Birallee Park Neighbourhood House (BPNH) is buzzing. On Mondays, it’s students from the Murray Valley Centre for Adults with a Disability, Wednesdays it’s VCAL students from a nearby high school who’ve come to learn hospitality skills and volunteer in their community, and on Thursday it’s a dedicated band of volunteers lending a hand to produce anywhere from 80 to 120 meals a day.

Some local major employers send along corporate cooking groups, and have staff who volunteer their time.  The number of meals they cook each week depends on what ingredients are available and how many volunteers have arrived to lend a hand but Sue says, ‘We are never without an empty freezer.’

Humming alongside BPNH’s hospitality classes are the other courses run at the centre which include Certificate III and IV in Aged Care, Work for the Dole programs, sewing classes, and community workshops on gardening and sustainability using the garden and greenhouse as a classroom.  In the garden eight seven-metre long garden beds are planted mainly with tomatoes which will be cooked and pureed for use during the rest of the year, leeks, garlic, herbs, rhubarb and beans.  In the greenhouse vegetable seedlings are being grown for disability support groups interested in growing and cooking their own food.

Our Table to Yours

Five years ago Sue Slater, then a member of BPNH’s committee of management, saw an article in the paper that really bothered her.  Local university students, the paper reported, were having trouble feeding themselves and were living on two minute noodles.

She went to BPNH co-ordinator Di Mant and said, ‘Can’t we do something to help?’ Together with the rest of the committee they came up with the idea of supplying free healthy meals to students.  Then a local church heard of their plans, and the idea grew to providing healthy meals for anyone in the local community who was having trouble cooking for themselves.

They called the project “Our Table to Yours.”  With a combination of food they bought with their own limited funds, and a small amount they grew themselves, the project produced around 25 meals a week. Five years later, they produce more than ten times that amount, distributing 300 meals a week to agencies and individuals across the region. 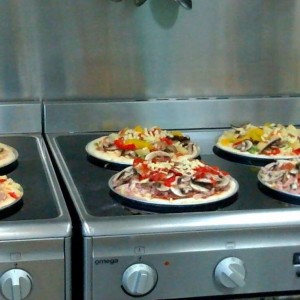 Wodonga, right on the border with New South Wales, has a population of around 39,000. For many people in Wodonga the inability to cook healthy fresh food for themselves or their family is a daily reality.  ‘It might be because of ill health, unemployment, financial pressure, isolation or not living close by to fruit and veg shopping and having no access to public transport.’

And it doesn’t just strike people in low socio economic groups.  Sue says they distribute meals to people who are recently bereaved or too incapacitated by illness to cook.

Sue says the energy and enthusiasm of everyone at the House is the reason the project has been such a success.  While the House, which is located on the grounds of a local church, is surrounded by large gardens, at the start of the project there were large vegetable plots to establish and a greenhouse to build.  And while the House had been purpose built and offered hospitality classes in a large kitchen, it was not equipped for such large scale production.

‘Di was a driving force in getting the program off the ground. She gave a talk at Rotary about the project and they donated two new ovens.  Our Chairperson Ed Foulston has donated not just tools and his time and energy but his knowledge was crucial particularly when we were building garden beds and installing a watering system and later running garden workshops, let alone helping me with all the administrative tasks involved.’

These days Sue is BPNH coordinator and the ‘Our Table to Yours’ program is a large one to manage.  ‘Ours is a 24/7, 365 day a year operation,’ Sue says. 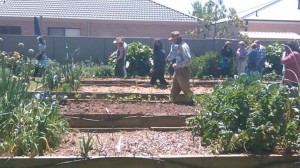 Apart from food produced from their own garden, Sue says they couldn’t manage without access to supplies of meat, dairy products and a range of processed foods such as rice, flour, sugar and pasta from Foodbank Victoria, as well as local donations of fresh produce.

A range of grants from the City of Wodonga, the Sidney Myer Fund, Anglicare Victoria, and the Department of Families, Housing, Community Services and Indigenous Affairs have enabled BPNH to buy a range of new kitchen equipment including mixers, processors and a commercial  freezer. A Climate Grant from Sustainability Victoria covered the installation of two 50,000 litre water tanks. BPNH’s own fundraising efforts have enabled the establishment of a 15kw solar power system and a range of other capital improvements.

BPNH works as part of the Emergency Relief Network, and is part of a web of services offering help to people in the area who may be struggling to put food on the table.  The start of the school year is one of their busiest times.  ‘Back to school is a hard time. People have credit card bills from Christmas, school books to pay for, utilities bills which have gone up that have to be paid.  Food is low on the totem pole. We encourage people to pay their rent and utilities first so they have that security.  They can always access food.’

Local agencies including Palliative Care at Albury Wodonga Health, Uniting Care and Ronald McDonald Family Room at Wodonga Hospital collect meals in bulk to distribute to their clients and their families. Around 20 people a week drop in to the House to pick up meals for themselves or their families.

Sue says while they are very proud of the program, it’s a challenge.  ‘We are committed to sustainability, recycling and reuse.  We keep our energy costs to a minimum through the use of solar panels and we use rainwater for the garden, and our cooks are all volunteers.’

‘The biggest cost for the program is not food but the packaging. ‘We use microwaveable containers which cost us more than $2000 a year.’

Sue says their approach to cooking is professional and systematic.  ‘All meals are labeled with the ingredients and date of preparation.  We enter all that information into a database, along with volunteer hours.  All supervisors are trained in food safety and we are always conscious about food hygiene and handling.’

Sue particularly enjoys working with local VCAL students.  ‘It’s great for kids to learn where food comes from; that it doesn’t just come from supermarkets.’

Then there’s the interaction with the volunteers.  ‘I have learned a lot from our volunteers, who all bring with them a wealth of experience from their own culinary backgrounds.  We have retired cooks and chefs on board, mothers and grandmothers, as well as our Chairperson, and their ability to devise a healthy nutritious menu from what is on hand often astounds me.’

‘Our program encourages social inclusion. We have volunteers who are new to the area, either because they’ve got a new job here or they have recently resettled through the immigration program, and they all make strong friendships with a whole range of members of our community including the unemployed, the retired and the disabled.

‘I must admit that after spending all day in the kitchen at the centre, and cleaning up afterwards, I don’t always feel like cooking at home,’ Sue laughs.  ‘But the most satisfying part of co-ordinating such a wonderful and exhausting program, apart from the assistance I know that we bring to many in our area, is the friendships I’ve made and the strong partnerships we’ve developed in the community.’