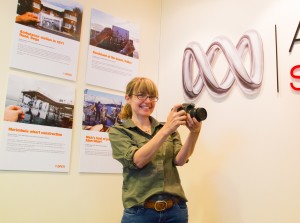 ABC Open producer Vanessa Milton’s patch takes up an area in New South Wales stretching from the Victorian border to Batemans Bay and across to the Snowy Mountains.

On any given day she can be running a writing workshop, teaching an amateur historian how to record interviews or helping a farmer make a film about life on the land.

Since 2010 when Vanessa started with ABC Open she’s run hundreds of workshops as part of the project to share stories of life in rural and regional Australia.

‘There’s so many benefits for rural Australians in telling their stories. The major media outlets are in the cities and a lot of Australians don’t understand what it’s like to live in the bush. People in rural and regional areas have different lives so here’s a chance for people to tell a story about it and have an impact on an audience.’

It’s common for people to come along to the workshops with a great story to tell but worried that they don’t have the skills.

‘It’s our role to show them what’s possible. We make the process as approachable as possible so that people feel they can do it if they have the time and the interest – whether it’s audio, video, photography or writing.’

In workshops Vanessa says anticipating and fixing potential technical hitches ahead of time helps things run smoothly. ‘Knowing what gear people have so they can work independently is important. It’s amazing the tools that most people have on their phones.’ Then it’s a matter of finding out what participants already know and what they expect so she can tailor the session to their needs and interests.

But while creating a story is one thing, publishing it is another.

‘It’s very new for a lot of people to think about publishing. A lot of them don’t think their story is particularly interesting to other people. One man I worked with was a retired carpenter who wanted to write something for himself, friends and family about his passion project, which was building a boat. But I said there’d be so much interest in this beyond your own circle. I worked with him to include more historical context for a national audience, and turn his journal of the project into a two part story called Building my dream boat.’

‘It’s great to have a platform for publishing and it’s always exciting to see them up online.’

What impact does it have on people who publish their stories on ABC Open? ‘It’s empowering, there’s no other word for it. Whether it’s knowing your story is valued, that you’ve learned new skills, or just the idea of being connected to other people in your own community, that’s a fantastic feeling for people who contribute.’

Stories published on the ABC Open website give readers powerful insights into life in the bush and gives contributors confidence that what they find interesting about their own small patch of the world is of interest to others.

Sharing stories about life in regional Australia knits people together and strengthens their connection to place.

Some stories travel from ABC Open to other ABC websites, TV and radio bringing stories of regional and rural Australians to metropolitan media.

ABC Open’s online community is thriving with fellow contributors supporting, challenging and learning from each other.

‘The great thing about an online community is that you might never meet in person but people write a lot about their lives so they really get to know each other. The community continue contributing to monthly projects and themes and giving one another feedback so it continues to grow and build. It’s fantastic.’

The ABC Open website is a great resource for adult learners with stories about people, places,memories and experiences of life in rural and regional Australia.

Read more of our stories about ABC Open and interviews contributor and learners Norm Clarke and  Vickie Mennie.