Support and learning for young mums 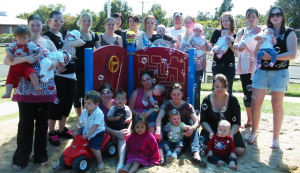 On Wednesday mornings the young mums start arriving around 9am, pushing prams, or carrying their babies into the Milligan Community Learning and Resource Centre in Bunbury, 180kms south of Perth.

Kate Kelly, Co-ordinator of Nixi Teen and Young Mum’s Group is there to greet them.  By ten past nine, after some singing and stories with their children in the free crèche, the mothers move to a room next door.

Nixi is a support group for teenage and young mothers and mums-to-be, who are under 23 years old.  The group meets for three hours a week during school term for 12 months.  While the babies are having fun, making new friends and learning more about the world around them, next door their mothers are doing the same.

Nixi provides the opportunity for young mums to meet together informally to share information and get to know other young mums who are in a similar situation.  Each year a new group of ten to eighteen young women are referred by community health services, youth workers or link up via social media.

Nixi began in 2005 and around 150 young women have taken part in the program since it began.

‘Meeting and making new friends is a very important part of the program’ Kate says. ‘It’s important because young mothers are often isolated, often feel judged and have lost connection with school friends and groups.  They don’t know anyone else their age having babies so it can be really hard.’

Loneliness isn’t helped by poor public transport.  Kate organises cabs to the centre for some young women who are don’t have access to transport.

The educative part of program covers topics to do with parenting, self-care, managing your money, education, employment and training and more.

Meeting and interviewing each young mother before the program starts helps Kate get a sense of what the young mums need when it comes to information and skills.  ‘Each girl’s circumstances are different.  Some have a lot of support; others very little.  Accommodation is a huge problem.  80% of them live with their own or their partner’s family.  Or it might be the problem of a baby that doesn’t sleep.’

Kate plans a program that offers practical information as well as personal development.  ‘We do a lot of work on healthy communication and healthy relationships as well as the practicalities of, for example, finding stable rental accommodation.’

Kate says the main goals of the program are developing friendships, bonding with babies, developing effective parenting skills and learning how to live on a low income.  This is particularly important for mothers under 16 who aren’t eligible for Centrelink allowances or old enough to work.

The first week is always nerve wracking, Kate says.  She is always nervous about how they will all get along and how to keep them engaged.  The young women are often very nervous at first too.  Many have been referred by local agencies and arrive uncertain about what to expect.  ‘There’s still a lot of stigma around about young mums and they often feel judged.’

It’s important, Kate says, that Nixi is a relaxed environment.  ‘Last year’s group was much younger than usual with many more in the 15 to 17 year old age bracket so we replaced the chairs and tables in the meeting room so the room would be less reminiscent of school.’

Kate invites guest speakers to help the young women learn about local services and to meet people who can help.  ‘It’s easier for them if they’ve seen a doctor at Nixi who’s come to talk about baby health.  The mum might think that the doctor seemed nice so it’s easier for her to make the move to make an appointment.’ The same goes for other professionals within the community from real estate agents to occupational therapists.

On a typical morning Kate begins with any information or announcements such as upcoming pram walks that she thinks the young women will find useful.  In the second hour a guest speaker or Kate will present information about a specific topic and the final hour is devoted to having coffee, talking or journal writing.

Checking in with the young mums to make sure the program is giving them what they expected is important, Kate says.  Between meetings Kate keeps in touch via a Facebook group and follows up any young mum who hasn’t shown up.  ‘I’ll just let her know we missed her.’  Occasionally a young mum will drop out.  ‘If she says “I don’t think it’s for me” I always say ‘Tell me why so I can improve it.’

Over the course of the year Kate sees big changes in the young mothers.  ‘I can see them maturing, getting much better at problem solving, not taking things as a personal attack, and much more able to talk things through and negotiate.’

By the end of the year Kate says most of them have gotten what they need and are ready to move on although the friendships continue.  ‘They move on to playgroup and stay in touch that way.’

Kate’s full of admiration for them.  ‘So many of them have potential and have gone back to school or on to uni and each of them is doing a fantastic job.  It’s so rewarding to see them go from being shy and unsure of themselves to being more confident and realising their own capabilities.’

Katherine Brown was very nervous when she arrived for her first morning at Nixi back in 2011 with her two month old baby.  Katherine, 16, had read about the program in a pamphlet at the hospital after the birth of her son Ethan.  ‘I was so nervous but I had to get out of the house.  I thought I’m going to go and try it − just give it a shot.’

Katherine was living at home with her family who were very supportive.  Still she felt cut off from her friends.  ‘You go in different ways from your friends when you become a parent; you don’t have as much in common and you have less to talk about.”

She was conscious of being judged both on the street and in social media.  ‘Social media offers the easiest forms of bullying.  When you’re out and about too you get the looks and the comments.  You have to build up a tolerance to it and not let it get to you.’

Initially she expected that at Nixi any new friendships would be of more benefit to Ethan than herself.  ‘I thought I’d make new acquaintances and we’d set up playdates with our children.  I never expected to make such close friends as I have.  My best friend now is another mum and we understand each other and what each of us is going through.  It’s fantastic.”

Katherine says she is ‘passionate’ about Nixi.  She says it’s so important because it offers connections and friendships.  ‘I felt so safe coming along to Nixi.  It is a safe zone where no one judges you.’

She also came out of the program much better informed.  ‘It definitely built up my knowledge and helped me improve my situation.’

Katherine resumed her schooling during her time at Nixi.  She completed Year 11 English and Maths by distance education and is currently enrolled in a TAFE Community Services Certificate III.  And she’s been employed under a traineeship as a peer support worker for Nixi.

Kate Kelly, Nixi co-ordinator says that Katherine is ‘fantastic’ to have as part of the program team.  ‘She can relate to the young mums who are part of Nixi but she’s also very professional.’

Katherine says she’s definitely more confident.  ‘I found I can really relate to and communicate with people, especially other young mums and I really enjoy being able to make a contribution.’

Katherine also shares what she’s learnt by giving school talks to Year 10 students where she talks about the way young mothers are treated.

Her long term goal is to become a social worker, but that’s still a way off.  ‘I won’t rush it. I want to get Ethan set up at school first.’

keyboard_arrow_leftSeminar: Learning to be a Lifelong Learner – Three things I have learnt
Talking about suicidekeyboard_arrow_right
Tweet
Share
Share
Article 170 of 440 articles in the category of News
Adult Learning Australia
menu