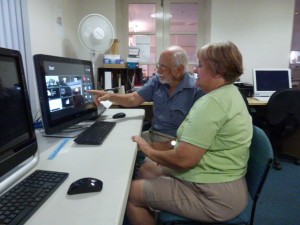 While the traditional owners of Alice Springs, the Central Arrernte people, have lived on the land for thousands of years, the town’s population is fluid.

Population churn, the turnover of people moving in and moving out, is high in Alice Springs, as it is throughout the Northern Territory.

In an average year more people move out of Alice Springs than move in. And in the retirement age bracket the numbers of people leaving are even higher.

But Alice Springs is making an effort to hold on to its older population. The local council and NT government are encouraging people to stay on past retirement and put down roots in the town.

Murray 82, retired at 78 after a career as a pilot with the Flying Doctor Service. Murray’s lived and worked in London, Auckland and Sydney but he chose to settle in Alice Springs.

His job gave him a technical edge that he found he could share with others. ‘We had computers fitted in planes and we had to figure out how to use them. We had GPS more than 20 years before everyone else.’

Murray gets a dozen or so a week to his computer classes. Some bring their own computers, others use the new NEC computers supplied by BFS. Broadband for Seniors is one of a number of programs that are run out of the centre, which is a hub for activities offered to people of retirement age and beyond in Alice Springs. 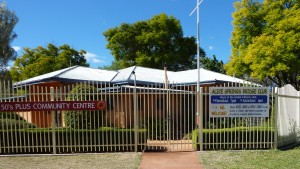 The Centre is managed by the Alice Springs Senior Citizens Association, National Seniors Central Australia and the University of the Third Age (U3A) and is used by a range of community groups, who offer a jam packed weekly program of activities and classes from woodwork and tai-chi to bridge and computer classes. Around 150 people come through the doors of the centre each week.

As well as being a volunteer tutor, Murray takes part in other activities at the Centre and is part of Wednesday’s snooker group. Murray says that older people can become isolated, especially if their friends move away. Then there’s those older people who have moved back to Alice Springs from more remote areas who can also feel isolated in their new home.

‘Part of what we do is help people stay connected and do something useful with their time. People, particularly those who’ve lived in remote areas before moving to Alice, have been highly independent. By moving in to Alice Springs they are swapping an isolated life for a life in town because towns offers the kind of services that they rely on more as they get older.’

‘Some people here travel 1500 kilometres to the coast to go fishing. One member of the Centre is about to visit his kids in WA. He’ll be driving thousands of kilometres on largely dirt roads. He’s been doing things like that all his life. So losing your independence can hit people very hard. We are helping people to stay independent as long as possible.’

Gavin Carpenter is one of a number of community members who approached the council four years ago about using the Senior Citizens building as a community centre.

After 33 years running the newsagency and general store in Tennant Creek and seven years running Timber Creek and Dunmarra roadhouses, Gavin and his wife Joan moved back to Alice Springs in 2005 to settle.

Retaining older people a plus for community

Gavin and Joan considered Queensland and South Australia as places to retire to but once they’d ‘travelled and had a look around’ Alice Springs was their choice. They’re unusual, Gavin says. ‘Most people who retire here have their car keys in one hand and the car running on the street and as soon as they get their retirement cheque, they’re out of here.’

The loss of older people from Alice Springs is sad, Gavin says. ‘You lose that continuity, that expertise, that history and that experience.’

The Alice Springs 50 Plus Community Centre helps older people who stay to connect with others. ‘When you look at the Centre’s diary and the range of activities that are on you realise what an asset this centre is to the town.’ Gavin’s pleased too, to see that the Centre is attracting younger people. ‘Some of the women in the exercise class are in their 30s and 40s.’

The fact that the Centre is used by such a diverse range of community groups of different ages and with different interests is a great use of a council building, Gavin says. ‘It’s as it should be. We’re making the most of it. As a result, it’s a great way to meet new friends.’

The Centre offers a great place for people to get together. ‘Older people have got to have somewhere that isn’t a pub or a club – a place where they can feel safe and welcome. Every town should have something like this.’