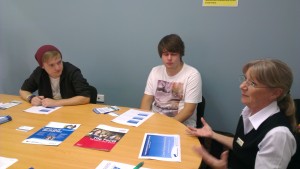 A new program in Adelaide’s northern suburbs is helping young people get back on a career path. ‘Where to from here?’ at Adelaide’s Mawson Centre is aimed at 17–24 year olds who’ve left school but aren’t working or studying.

They’re a group that course facilitator Kathryn Brady says can be vulnerable particularly if they are not entitled to Centrelink payments and, as a result, don’t have access to the support services offered through Centrelink.

‘They’ve really fallen through the gap and while they want to be independent, they don’t have the information or the supports available to them to help them take next steps,’ Kathryn says.

The seven week course aims to plug the gap by showing participants that there are many different pathways they can take to achieve their goals. The course aims to build confidence and communication skills that help students make decisions and take action.

One day a week for seven weeks participants are engaged in developing teamwork and communication skills, goal setting, practical excursions and interview techniques.

Extra short workshops are offered according to the interests of the group such as Child Safe Environments, Safe Food Handling for young people interested in working in child care or hospitality.

Although all twelve participants in the first program have completed year 12, their choice of subjects often limited the options they had for further study.

Confidence can be a big problem too, Kathryn says. ‘Most of them seem really confident from the outside but on the inside they aren’t nearly so self assured so the prospect of going into the workforce is really a big step.’

And it can seem even more daunting if you haven’t been doing much since graduating from high school. ‘Around half had been sitting at home on their own since finishing school and that can be quite a depressing experience.’ 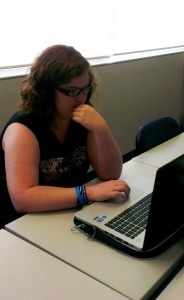 One of the biggest challenges Kathryn says is developing a resume.  ‘Once we get to the stage in the course of putting their CVs together they know what employers look for but they have real trouble identifying transferable skills. We encourage them to replace their generic list of achievements and abilities with a specific list of skills that are relevant to the job they are applying for.’

‘For example, one young man had done all the video recording and photography for a disability basketball match that had been offered across a number of schools. It was really a big project. By breaking it down we were able to help him identify that he was able to work effectively with a range of people from different backgrounds including people with disabilities, that he had manual handling and occupational health and safety skills, quite apart from his experience and ability in audio visual production.’

Kathryn says participants often focus on the end result of a project rather than the many skills they learn on the way. ‘They will often resist and say “But I was only …”. It takes a shift in mindset for them to identify strengths and play down weaknesses.’

But by the time they get to interview practise at the end of the seven weeks they’ve got the idea Kathryn says. ‘By then they know that it’s important to talk up strengths and turn your weaknesses into something positive. I tell them “You might start off saying you are a social butterfly but turn this around by adding I’m really good at building networks”.’

Kathryn says offering participants a positive experience of learning is critical. ‘Some of them have had negative experiences of education and that’s why they are disengaged so we want to make sure they know that adult education isn’t school.’

Kathryn says that despite having finished year 12, many participants have problems with literacy and numeracy. ‘We make sure we mix up activities, and never do same thing twice to keep them engaged.’

How does Kathryn know if the program is successful? ‘Success is them coming back each week and leaving with a smile at the end of each session. To me adult education is all about being engaged.’

Of the first group through the course, four have found jobs, and the remainder have gone on to accredited and non-accredited training.

‘I’m very proud that these young people are able to move forward by the end of the course. There is nothing worse than people sitting behind closed doors, isolated and cut off. I love making sure people are engaged in the community whether it’s in paid work or not. There’s a huge need for volunteers and helping young people see that it’s the skills you get through those experiences that will get them paid work in the long run is very rewarding.’

The ACE Youth Career Awareness Program was developed by the Mawson Centre (a joint partnership between the City of Salisbury, University of South Australia and the SA Department for Education and Child Development). This course is funded through the ACE program, as part of the Government of South Australia’s Skills for All initiative.