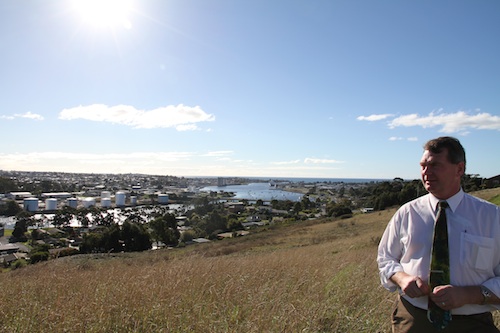 Devonport Tasmania has launched a ‘Live & Learn’ Strategy to set a new direction for the city and establish a flourishing culture of lifelong learning.

Devonport Mayor, Alderman Steve Martin left school at 16 then returned to study in 2011 aged 52 as a business student at University of Tasmania.

‘Back in high school I was good at maths but I was very poor at English. So here I was at the age of 52 having to write all these 3000 word assignments. When I was at high school I didn’t write 3000 words a year! It really got my adrenalin going, it was a real buzz and I got a great sense of achievement out of it.’

Now Mayor Martin wants his whole city to get excited about learning.

It was during his university studies as a mature aged student that he stumbled across the idea of learning communities. What if the Devonport region which has faced plenty of challenges – high unemployment, falling school retention and low levels of literacy and numeracy – adopted a whole of community approach to learning?

‘It was like a light went on in my head. If we could put lifelong learning at the centre of a strategy we could improve Devonport’s social, cultural, economic and environmental wellbeing.’

Devonport Council brought together 150 representatives from education, community, industry, youth and government sectors to come up with a plan for how to lead, inspire and motivate the community to embrace lifelong learning.

Mayor Martin said that everyone involved has become aware that there is a vast amount of educational opportunities –formal and informal – already available in the area. Making the community aware of the range of learning experiences going on in their city and viewing themselves as learners is an important part of the cultural shift, Mayor Martin says. For example, when people are given a demonstration and a chance to practise how to tune an engine at a local motor show, that activity should be recognised and valued as a successful learning opportunity.

Organisations can benefit from partnerships with other community organisations as a great way of learning from each other. Local charities, for example, could collaborate with other charities share knowledge, skills and people.

In response to poor school retention rates Mayor Martin is enthusiastic about the idea of a sports academy for young locals to offer training programs in sports event management, administration and coaching.

‘We are sports mad on the north west coast. It would be great to tap into that to attract young people back to learning. Sport teaches you about leadership skills, about how to work as part of a team. You also need maths to understand scoring, manual dexterity skills for ball handling, and an understanding of aerodynamics to better bounce and kick a ball. Sport is not just about physical fitness. And it is a terrific way to get young people back into learning.’

Employment opportunities in Devonport are set to get a boost with a planned $250m Living City development in Devonport and the Australian Masters Games which the city will host in 2017.

‘By embracing lifelong learning as a community we believe that we’ll be prepared to take advantage of the many opportunities which are set to come our way over the next decade.’