Cooking up a food literacy course

It’s Thursday afternoon at the Cheltenham Community Centre and the place is abuzz. Women from a range of cultural backgrounds mill around then take their places in the kitchen. Today’s teacher is Mary, an Indonesian woman who’s been in Australia for six years. Normally shy, today Mary is taking charge, setting out her ingredients for her cooking demonstration. 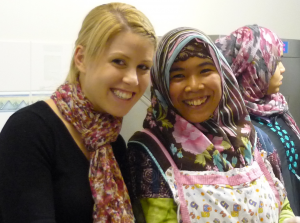 As Mary prepares and cooks her meal students ask questions, admire her handiwork or make suggestions on how to make the meal healthier or more nutritious by substituting butter for oil or swapping salt for spices.

Her pupils are women from Iran, Iraq, Afghanistan, Egypt and Morocco who’ve come together at the centre to learn about food shopping, cooking and healthy eating in Australia.

Also in the class are Lynn Field and Liz House, from Flinders University and Sophia Katari, Community Development Worker from the Muslim Women’s Association who between them cooked up this course on healthy eating and food literacy for CALD communities. The six fortnightly workshops, which ran at both Cheltenham and Kilburn Community Centres in South Australia in 2012, are part of a food literacy pilot project developed by Healthy Eating Local Policies and Programs (HELPP) at Flinders University.

Lynn says it was important to identify the needs of the women involved before planning the classes. They ran focus groups with participants before the course began to find out what they wanted to know.

‘There was a lot of confusion about label reading, for example. “What did all the numbers mean?” Food storage was an issue too. If you come from a country where you shop every day to one where you shop every week, learning how to keep food and stop it from spoiling is a new skill. Then there were health issues. Many had choices and alternative cooking techniques and Lynn offered nutrition education around a specific topic. Understanding the context in which the participants were learning was important, Lynn says.

‘Some of the women had low English skills, others had low or no literacy in any language so we had to use teaching materials that were very pictorial. Our class was in the afternoon, and often the women had done a craft or an ESL class beforehand so we had to make our course engaging and active because the women had been there a few hours already. They had small children running round while we were working and we had to keep an eye on the clock because most of them had to leave in time to pick up older children from school. The course we designed had to be simple, easy to understand, engaging, fun – and not too long.’

Each session a different woman would plan, shop and cook for the entire group with a budget of $30 to feed ten people. For some, shopping for food was a new experience as it had been a role delegated to their husbands. For others, handling money and keeping receipts was a challenge. But Sophia says, all of them managed.

Each woman’s meal was a demonstration not just of her culture and tradition but a chance to demonstrate her expertise, something which would build confidence and self esteem.

Lynn is very pleased with the result. ‘We really noticed changes week by week in the food they cooked and the ingredients they brought along. They started using less oil and salt in their cooking and making healthier food. They asked lots of questions and got really involved in discussions. They really took it on board.’

Sophia knew the class would be a success. ‘These women love to cook and show off their skills in the kitchen.’ For Sophia, classes like these are steps on the path away from social isolation to increased involvement in the community. Women make new friendships, take part in more activities, and build both their language skills and sense of confidence. They also help women to reduce their own and families’ risk of diabetes, which is more prevalent in some migrant and refugee groups than among the Australian born population. ‘Many of the women bring their daughters to the classes and they are taking this knowledge home to their families.’

Lynn recently ran a workshop on food literacy for CALD workers that had a ‘phenomenal response’, booking out in just ten days and with a long waiting list.

She’s developed teaching materials designed for people with no nutritional background to deliver and has developed a step-by-step guide for presenters, including session outlines, activity sheets, flipcharts and other course materials.