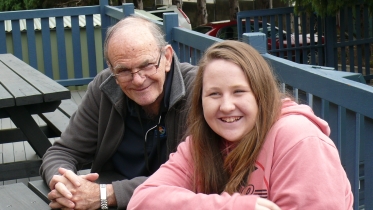 An intergenerational mentorship program in Toowoomba is turning lives around.

On a shaded park bench in Toowoomba, a young woman talks animatedly to an older man who nods his head and listens. At first glance you might not think they have much in common. But they are part of an award winning mentoring program that’s gaining a lot of attention.

The project pairs two groups of people in Toowoomba who often feel marginalised – young people at risk of leaving secondary school and older people who after a lifetime in the workforce can feel socially isolated and undervalued. The result is an intergenerational mentoring project that is turning people’s lives around.

The program is a partnership between Toowoomba Older Mens Network (TOMNET) and Toowoomba Flexi school – an annexe of Centenary Heights State High School.

Flexi School is an alternative education site catering for 70 senior secondary school students who for one reason or another have become disengaged from mainstream schooling.

TOMNET is a not-for-profit community organisation established in Toowoomba in 2001 to support older men in regional, rural and remote locations in southern and south-west Queensland.

In 2006, an informal ‘drop in’ mentoring program began with older mentors offering advice and practical skills to assist young people to complete their schooling. In 2008, with funds from The Rotary Club of Toowoomba East, the program was developed so pairs of mentors and students worked together on literacy and oracy skills. This year 15 pairs of year 10 students and their TOMNET partners will take part. 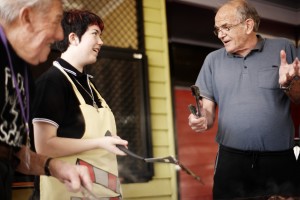 Alan Yorkston, TOMNET member and retired magistrate, works as a mentor. ‘When I first went to Flexi School I saw the kids and I thought “What on earth am I doing here?” I also thought “It wasn’t that long ago that I was sentencing kids that looked just like the students here” so I guess I also was guilty of pre-judging them. I now realise just how wrong I was. Now wild horses couldn’t keep me away from the place … Once I started to converse with the kids I realised they were simply normal kids, but with diverse opinions who may be marginalised, disengaged or who had perhaps dabbled in crime, have a few disadvantages or problems or simply just can’t fit into society’s preconceived mould of how teenagers should look and behave.’

‘Initially I had the attitude that life has been good for me and that I may be able to give something back, but it didn’t take long to lose this somewhat arrogant attitude and realise I’ve learned so much from talking to the kids … The other thing I’ve noticed is that some of the mentors really take to the mentoring. They become much more positive in their outlook. It also benefits the mentors in coming to understand the situations the students find themselves in.’

Flexi Outreach Officer Melinda Priddin says the one-on-one tutoring of young people helps young people improve their communication skills. ‘They are better at formulating and expressing opinions, discussing ideas and thinking more deeply. Because they are better at expressing themselves this allows them to think more imaginatively and confidently.’ 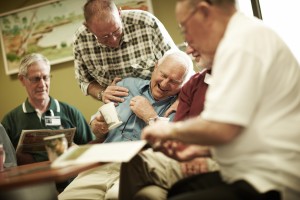 That doesn’t mean it’s not challenging. Mentors do most of the listening and encouraging students to talk. But active listening is a real skill, Melinda says, so training helps mentors develop this. Topics for discussion between mentors and students draw on topical issues such as local drink drivers and the causes and consequences of such behaviour. Mentors might share what things were like when they were the same age or share information from their own experiences.

‘Our young people feel comfortable and confident talking with a mentor and they can apply this to other situations and develop more meaningful interactions with other people they come across.’

That’s not to say that the work is all smooth sailing for the mentors. ‘Working with young people can be very challenging if you’ve had a conservative middle class happy existence. A lot of young people have had some fairly significant trauma and abuse and come from fairly dysfunctional families. We need to find a way of supporting mentors through that. The challenge is to know the difference between being sympathetic and empathetic. Young people don’t want you to feel sorry for them, it’s enough to acknowledge that things are tough for them.’

Melinda says feedback from former students is very positive. ‘One person wrote on her evaluation sheet “It made such a difference to me to think that there is someone who can’t wait to see me each week and who takes the time to listen and hear what I have to say.” Those kinds of comments are typical, Melinda says, and show the kind of impact the one-on-one program has on participants.

For mentors it’s counteracting negative feelings about ageing. ‘As people get older they can start to feel they don’t mean anything to society. The mentoring gives the mentors a sense that their life experiences are meaningful to someone and that they still able to make a difference. It gives people a real sense of purpose and meaning that they might have lost.’