Sometimes it takes Ryan Buckley a flight in a light plane and a four hour drive across unmade roads to get to work.

Ryan and Tina offer workplace training at small stores employing just two people at Epennara to large ones like Tennant Creek, with 72 employees.

Outback Stores was established as part of an initiative to improve Aboriginal people’s health by improving the availability and amount of reasonably priced healthy food, drink and grocery items available for sale in local communities.

Outback Stores take on management and training at remote stores at the invitation of the local community, and in partnership with the community aim to run a fully stocked store comparable to that enjoyed by people in towns and cities.

Sometimes this means establishing a new store or refurbishing an old one, improving shelving, refrigeration and retail equipment. It always requires training local people in the variety of tasks involved in storing, preparing, promoting and selling a much broader range of merchandise.

The goal of staff training is to develop a workforce that will enable the community to take over and run a successful store themselves. Profits from the store go back into the community to invest in better equipment and community projects. 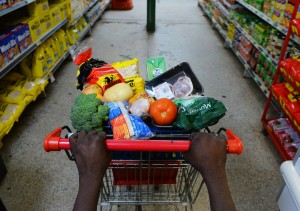 Food in remote Australia is expensive

Food in remote areas of Australia can cost 50% more than food in regional towns or cities. The cost of fuel, transport and refrigeration adds to food prices especially in areas where deliveries are affected by the weather. For example, during the wet season when roads are closed and food has to be flown in.

By the time fresh produce reaches a community store, it is not only likely to be more expensive but far less fresh than it would be in urban centres. And if you’re not there in time to catch the delivery, you can miss out on fresh produce altogether.

Outback Stores forms partnerships with suppliers in major food centres to supply more affordable produce to its stores. Having a remote community store stocked with cheaper and healthier foods means local people no longer have to travel long distances to shop and have greater choices when it comes to shopping.

Outback Stores training officers Tina Gill and Ryan Buckley offer Certificate II and III in Retail Service so staff can learn how to do a range of jobs required in different parts of the store.

‘It’s work-based training where people practise what they’ve been taught. We talk about the theory behind why the employee is doing something, show them how to do it,watch them doing it and then provide feedback,’ Ryan says.

‘We make it fun. We work alongside them and talk to them as they go about doing what they do. They always ask you when you’re coming back.’

Working as a trainer in remote communities requires not justformal qualifications but great skills working with people for whom English is a second language, Tina Gill says. ‘It’s important to adapt the material to the learner’s culture and experiences,’ Tina says.‘We don’t assume everyone has literacy and numeracy skills and we use a lot of picture-based material, and we use stories and role plays to get our message across. You become really aware that words used in the training materials might not be used in communities. So you substitute them for local words – it’s much more effective in communicating with people and it helps us update our procedures and materials.’

‘We work alongside trainees, observing them and talking to them as they go about their work stacking shelves or using the register, asking them to explain what they are doing and why.’

Tina’s experience growing up on Groote Eylandt has stood her in good stead for the job. ‘I can tell when someone’s engaged and enjoying themselves as well as when it’s not going well by their body language.’ 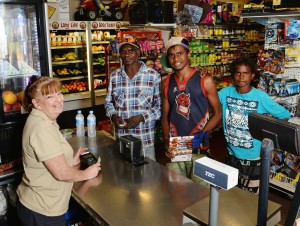 ‘You know training’s been successful when you see a relaxed store manager, because you know that means well-trained staff where everything’s running smoothly,’ Tina says.

You can also notices changes in the people you’ve trained, Tina says. One man in his 40s who she’s worked with for a year has a new perspective on the community store. ‘He can see that the shop has become a social vehicle to educate others. He’s one of the relief managers now and he wants to stay where he is. It’s his mother’s country and he feels very strongly about the place. He can see that the shop is not just a place to sell Coke and pies but a vehicle for greater learning and opportunities for healthier living.’

He recalls one young woman he trained in WA. ‘Two days in she said, “I’m gonna be the manager one day”. She went through the workbooks herself, and humbugs her manager to do more advanced work things. She’s got 4 kids that she fits around her job. She’s really determined to make it work.’

Staff can take on management roles whether it’s running the community store or taking on a role at Outback Stores. In 2014, five community stores were managed by trained local staff acting as relief managers while Store Managers went to a conference. That’s a huge change,’ Tina says. ‘Not that long ago, there were no local relief managers. It’s a huge achievement that makes us very proud.’