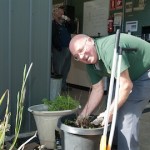 Australian and international delegates from the 5th National Men’s Shed conference took to the road to study the secrets of the success of the Men’s Shed movement.

It was early morning and a convoy of cars drove through the streets of Ballarat. The Men’s Shed crawl had started. Around 50 people had car pooled and were beginning a day-long guided tour of five of Victoria’s men’s sheds.

The shed crawl was a break from the two day 5th National Men’s Shed Conference held from 27 to 29 October in Ballarat. The mood was jovial. Included in the group were visitors from Ireland and the Netherlands as well as visitors from most other Australian states keen to observe first hand what it is that has made Australia’s men’s sheds such a success.

Each shed is unique

Paul Sladdin, President of the Victorian Men’s Shed Association says the delegates were interested in doing the crawl because of the diversity of sheds in Victoria. ‘No two sheds are the same. It’s not like McDonalds, it’s not a franchise.’

Sheds can vary in the way they’re managed, who they partner with as well as in the diversity of activities they offer. What they have in common is good relationships with local organisations and a positive impact on shedders’ self-esteem. Sheds offer a place for men to talk, work together on projects, and feel less socially isolated.

‘At each stop we saw how the sheds are highly regarded and welcomed in their local communities, and how that value is expressed in different ways,’ Paul said. At Buninyong, it was the support of the wives encouraging the men to attend the shed; at Winchelsea it was the auspicing of the shed by the neighbourhood house; at Geelong it was the strong relationships with the local council and local community groups who shared the premises. 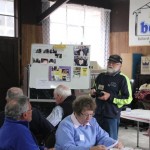 Each shed has its own personality. ‘Ballarat’s shed is an independent organisation that has a very large physical space. They’re involved in community markets and in running a soup bus for the homeless. At Buninyong, the shed is on private property so it’s smaller but it produces woodwork products for the local market. Winchelsea is very much a community hub and because it attracts retired farmers and people from the land, it’s very involved with a community garden. The Norlane shed does a lot of work cross culturally, offering tutoring to the local culturally and linguistically diverse (CALD) community. At Geelong East, they share a common room with the local pony club and so the shedders are involved in constructing jumps and doing leather work for the club.’

At each stop, up to 20 shedders were on hand to talk to visitors and show them around, which gave visitors invaluable first hand experience. ‘Someone can get up at a conference and show a PowerPoint presentation and talk about sheds. Or you can get out on the road and visit a few. It’s the difference between showing and telling. People learned things on the crawl and asked questions and had conversations with shedders that really brought the men’s sheds to life. You can’t beat that for learning.’

Men’s sheds began in Australia in 1996 to provide social interaction and improve the wellbeing of men who are no longer in the workforce. Currently there are over 1000 sheds registered in Australia. Men’s sheds have since spread to New Zealand, Ireland, Scotland, the US and are planned for the Netherlands.