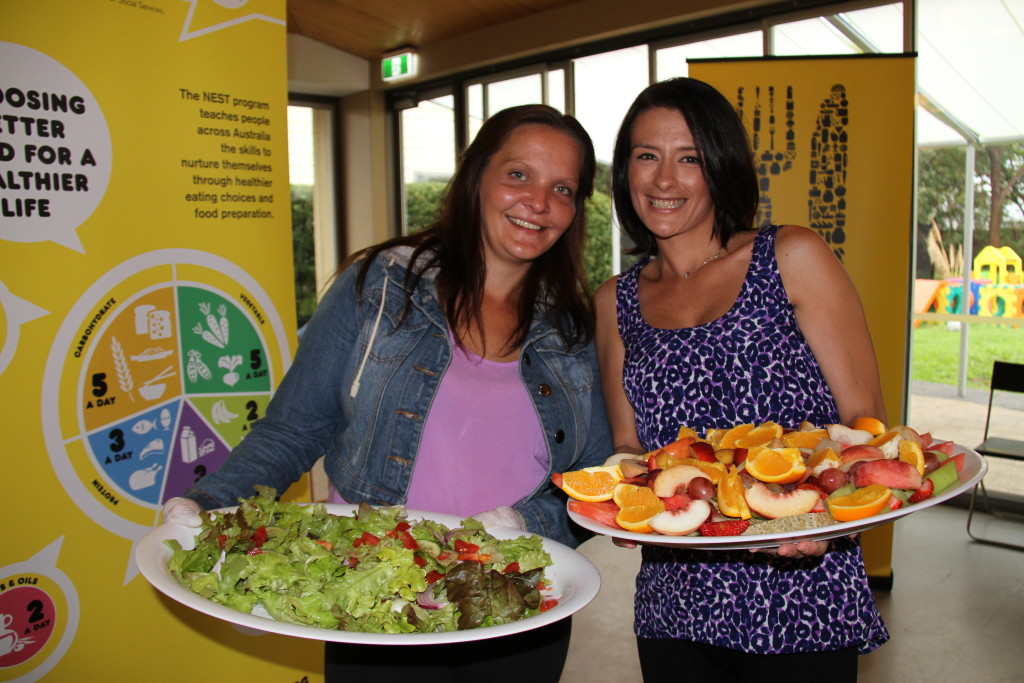 At Adelaide’s Hackham West Community Centre agroup of 15 people peel carrots, chop onions and boil water for pasta. The air is filled with the smellof frying garlic and onions. There’s laughter and chatter as people pass bowls and knives back andforth. This weekly class aims to teach locals how to choose and cook healthier food on a budget.

The Nutrition Education Sustenance Training (NEST) program is a free course run by OzHarvest, a charity which collects and redistributes surplus food and who provide the ingredients for classes.

It’s week one of a six week program and most of the people in the group have never met before.

‘Every group is different, which is always a challenge’ says Amanda Kelly, OzHarvest NEST host and course leader, ‘but we always have so much fun.’

Each session covers a different theme, which Amanda adapts to suit the needs of the group she’s working with.

Topics include balancing your diet; eating food for long-lasting energy; the truth about fats, oils and sugars; budgeting; healthy eating for young children and parents as well as reading food labels, planning, storing and strategies to reduce waste.

The nutrition education is low key and combined with hands on practice.

‘We have a chat and a cook. Everyone in the group cooks in every session. It’s very informal and relaxed. Then we sit down and eat what we’ve cooked together.’

In the group’s first session, ‘Balancing it out’ Amanda describes the five food groups and together the group talks about ways of making favourite meals healthier.

‘For example, if we’ve got a group of older people we will adapt their favourite recipes and give them a healthy twist. So we might make spaghetti bolognese adding any left over veggies into the sauce. Or for dessert we might make a bread and butter pudding using brown bread and a lot less sugar.’

Amanda uses practical exercises that help people understand complex nutritional information in a way that makes sense but also helps them make decisions that are better for their health.

‘Then we put it into practise by cooking a meal that incorporates what they’ve just talked about.’

In the healthy fats session, the group use avocados to make guacamole, and the session on sugar has them whizzing fresh fruit smoothies and baking muffins.

The final session, called ‘Fridge raid’ is a test of the group’s ingenuity.

‘I tell them to bring along something that’s in the back of their cupboards. We pool it all on the table and combining it with OzHarvest food, we come up with ideas for what we can make. We aim for five dishes.

‘It’s all about how to cook healthy and delicious meals on a budget. These are people on low incomes so learning about meal planning and avoiding waste is important. We encourage people to shop for food that’s in season because it’s cheaper, better quality and more nutritious.’

Amanda says she sees changes in people over the course of the program.

Amanda says cooking brings people out of their shells.

‘Everyone gets a chance to work with different people each week. One person was very shy, didn’t talk much and wasn’t particularly confident socially. But by the end she was so much more relaxed. Sitting down and eating together at the end of every session makes it a very social experience for people.’

‘And the NEST program was a great way to attract new users to the centre. For most of the group it was their first time attending the centre and most hadn’t met before.

Cathie originally trained as a nutritionist herself and her first job in Adelaide was teaching homeless people basic cooking, shopping and budgeting skills so she knows the challenges involved.

Cathie says some nutrition training  can have a finger-wagging feel about it that’s offputting. But OzHarvest’s down to earth approach created a great atmosphere for learning.

‘I love the way they aren’t judgemental about what people buy and eat. They don’t say “Buy organic” they say “Look at what’s in your cupboard and let’s work with that”. If people have products in their cupboard that are high in salt they say,“Let’s look at ways of getting around that”.‘

Cathie says the impact of the course has been terrific.

‘People who did the NEST course tell us they use what they learned regularly at home. Things that perhaps other people take for granted, for them were really new. For example, they say when they are out shopping they look at labels differently.They look at the ingredients on the labels and they look at the price per kilo label to help them compare prices and get a better deal.

‘It’s changed people’s lives. They are more aware and they can take more control, which is always a good place for people to be.’

Once inside the centre, participants also became more aware of other programs on offer. ‘We had people say “I never knew you did parenting programs here, or yoga”. We’ve had people come back and use the centre who hadn’t used it before.’

What’s the future for NEST at Hackham West? ‘We’d run it again in a heartbeat,’ Cathie says. The centre is hoping to include NEST in next term’s Smart Living program.

‘It’s such a valuable resource, we’re always thinking about ways we can get them back.’