Hands on at Hawthorn Hackerspace 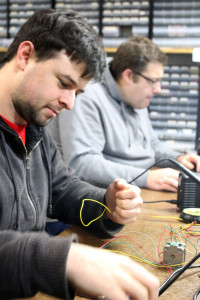 Hacker or makerspaces are the latest in a long tradition of community spaces that offer opportunities for informal learning.

On a dark winter’s night in Melbourne’s Hawthorn, a lime green perspex door trimmed with LED lights up a cobbled laneway. The Connected Community HackerSpace (CCHS) in the converted garage welcomes people who want to work on DIY technology or artistic projects. Over 50 members have access to space, tools, technology and to a community of like-minded enthusiasts.

Inside a handful of members are working together and individually on a range of DIY projects. At one table, Tim is building a device that uses sensors and internet connectivity to send information. If an elderly or frail person carrying the device in their pocket has a fall, it can send a message via email or social media to alert health professionals or family.

At the lathe, Andrew is enjoying learning more traditional machine shop skills that he missed out on at school to make a scribe that can etch plastic, a far better alternative than a permanent marker.

Founder Andy Gelme says you don’t need to be a technical whizz or a computer nerd to join. Members don’t need any qualifications other than the desire to experiment in building a solution to a problem. ‘You need to be a self starter and there are always other people in the community who can help you over hurdles.’

Project ideas can be relatively straightforward and offer lots of chances to learn new skills. ‘It might be something as simple as “How can I measure the amount of water in my rainwater tank?”’

Learning by making is a hands-on process. First there’s the process of experimenting, seeing what works and what doesn’t, adapting your approach and trying again.

Hackerspaces, sometimes called makerspaces or fablabs, are places where people gather to invent, create and learn through creative DIY. Hackerspaces emerged in the early 1990s and today there are over 1200 worldwide, with around 20 in Australia.

‘Our goal is to empower people to experiment and figure out the way to make the project work within the budget they’ve got and the tools available,’ Andy says.

The CCHS idea started in Andy’s garage in 2009 and took off from there. ‘Anyone who wants to learn or share knowledge is welcome.’

An ongoing challenge is overcoming the negative connotations of the word ‘hackerspace’. Andy says it’s disappointing that the word ‘hacking’ is so misunderstood. Many people think of hackers as cyber criminals breaking into computer systems, stealing online passwords and breaking into bank accounts. In fact the term also refers to creative people who adapt and alter existing technology to solve unique problems or adapt a piece of equipment to use it in a new way.

One group project team that included Andy Gelme invented LIFX, the first WiFi-enabled LED lightbulb controlled via smartphone. After a successful Kickstarter campaign the concept has since been sold to a US company. 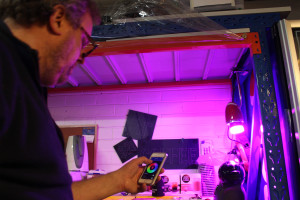 Whether they are working on an individual or a group project, each member is there to learn as well as teach. Then there’s sharing what you know with others, and in group projects, collaborating and communicating to solving problems.

Andy says the diversity of the people who are part of the community is amazing. ‘We have people who know heaps about programming but zero about electronics and vice versa. We’ve got people who’ve retired from an industry who have decades of knowledge and experience and are fantastic contributors. So you can come here to work on projects with all sorts of people from hobbyists to professionals and there’s this real crossover of knowledge and skills between everybody.’

Being a member has its responsibilities. ‘People make the place work. We encourage an expectation that you come along to both learn and contribute as much as you can.’

Hackerspaces like CCHS are open to anyone with an interest in modifying, making, improving or inventing things, regardless of gender. Members differ in age, educational backgrounds and ability but women are still underrepresented, Andy says. One woman has been an enthusiastic member, combining craft with electronics to make high-tech soft toys. ‘We’d love to see more women here. We’re always working on outreach, we’re trying to make it a welcoming and comfortable space and removing any barriers to entry.’

Open days and workshops are one way the CCHS promotes itself and recruits new enthusiasts. On family days, NodeBots and Minecraft hacks are popular.

Hackerspaces have become popular since the internet has made the technology and knowledge for DIY projects more available than it’s ever been. At the same time, especially in cities, the lack of space means fewer people have the room to set up a home workshop.

Andy says the opportunity to socialise is just as important as access to the technology and tools. ‘Some people have a much better set up at home but they come here because they feel valued. They feel they can contribute something to others.’

Preparing their new space also had a bonding effect. Members donated furniture and equipment. ‘We really worked together on getting the place the way we wanted it and it really built a sense of community.’

You just have to look around to see that the building itself has been hacked. Members have adapted and shaped it for their needs, from designing and installing the fluorescent plexiglass door to let in light and air to the shelving, benches, 3D printers and security system. A member-built card reader attached to the milling machine only allows the machine to be turned on and operated by members who’ve completed the required safety training.

More information about Connected Community Hackerspace (CCHS) is available on their website.