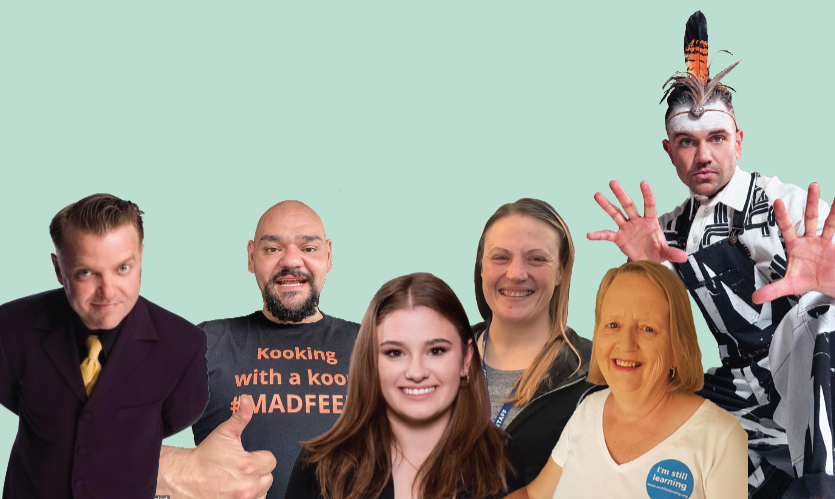 Join us at the Adult Learners Week 2022 launch as we hear stories from inspiring people who have found connection and opportunity through learning.

Rusty Berther – our MC – Rusty started his working life flipping burgers at Maccas then worked as a roof plumber before finding success and touring the world as part of the comedy duo Scared Weird Little Guys. Rusty is an author and all round entertainer, vocalist and musician.

Mitch Tambo – A proud Gamilaraay man, Mitch blends traditional Aboriginal sounds and language with contemporary beats and production. His First Nations’ version of You’re The Voice saw him reach the Finale of Australia’s Got Talent. But it was a pathway program that switched him onto learning after adopting a less than enthusiastic approach in school. Passionate about education and diversity awareness, Mitch is a much sought-after commentator, cultural practitioner and motivator.

Brendan Murray – Palawa man Brendan Murray doesn’t have great memories of school, where he experienced violence, bullying and racism. He left barely literate in Year 9. At 26, an adult literacy program helped him to overcome years of stigma and shame to ultimately become an inspiration to others on transformative power of education, culture and resilience.

Dottie Wilson – Coming from a small regional town, Dottie struggled with the stigma of being a foster kid and school drop-out. But she started measuring success by how much she could prove everyone wrong. By demonstrating there’s no single pathway to success, Dottie won the ABC’s Heywire competition, along with not one but two TAFE NSW Excellence Awards.

Nathan Lyons – Nathan was raised by a single mum in a housing commission flat, and money was tight. His mum stretched their shoestring budget by creating tasty meals with basic ingredients. Now a father of six, he is teaching others his mother’s tasty, simple, budget-friendly meals in his video program Kooking with a Koori, which is now a Tik Tok sensation.

Alyssa Hand – Alyssa is an inspiration to the disadvantaged young people she now educates and mentors at a local community centre in South Australia. But she’s had to navigate her own rocky road of addiction and depression to find her place in the world – helped along the way by an inspiring careers counsellor.

Mandy Gosetti – After her partner died, Mandy found there was much more to deal with than loss. Her role in the world had changed, along with the practical support she once had. She had to quickly upskill to fill the gaps her partner left. Then through a happy confluence of accident and design, Mandy now helps hundreds of people who have lost a partner to gain new skills, confidence and friendships.